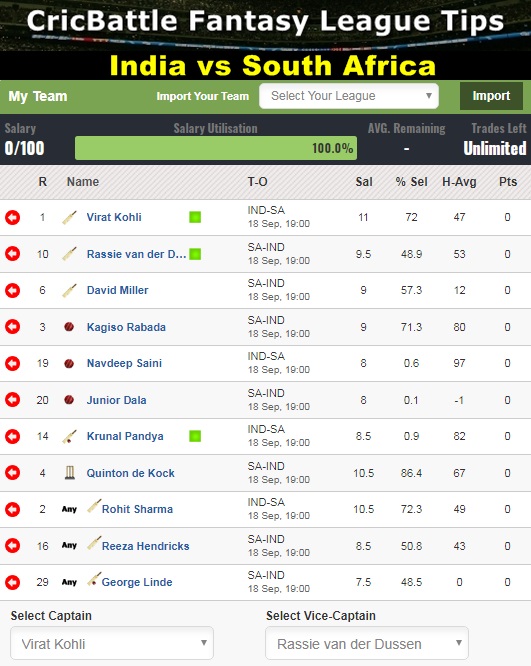 India vs South Africa on September 18

Both India and South Africa were filled with disappointment in the first game of the three-match T20I series at the HPCA Stadium in Dharamshala. It rained throughout the day and didn’t stop fully even during match time. In the end, the contest at the picturesque venue had to be abandoned without the toss. The groundsmen tried their hearts out, but the downpour kept undoing their work. It’s time for the second T20I, which is scheduled to take place on September 18 at Mohali’s IS Bindra Stadium. For the time being, there is no forecast of rain and that should come as a sigh of relief for the players. Both teams will want to win the contest as a victory will help them take an unassailable lead. The Proteas didn’t have a great World Cup campaign, having bowed out before the semi-final. However, the visitors can take heart from the fact that they are yet to lose a T20I versus the Men in Blue in the latter’s backyard. But it’s also a fact that India have won both their games in the shortest format in Mohali in 2009 and 2016 respectively. Earlier, India whitewashed the West Indies in the Caribbean. The hosts have put forth more or less the same squad for the upcoming matches as well.

Top captains & vice captains – With a new stand named after him in Delhi, Virat Kohli became the youngest ever player to have this recognition. Rightfully so, the Indian captain has been one of the most prolific run-getters for India in the last decade and is a player who is in terrific form coming into this series. It’s not even a year when Rassie van der Dussen made his international debut. In the short time, he has already become a crucial member of the Proteas. In seven T20Is, he has gotten 253 runs at an average of 36.14 and a strike-rate of 133.15. Time and again, he has shown that he isn’t someone to crumble under pressure.

Smart pick – David Miller comes into his own in Mohali which is home ground in the IPL while playing for the Kings XI Punjab. He has scored 628 runs in 25 innings at an average of 41.87 and the strike-rate of 150.96 at the venue.

Cautions Pick – The world seemed perfect for Shikhar Dhawan, when he got the World Cup century against Australia back in June. Ever since, he has strained to find his feet, especially after his injury. The southpaw could muster only 27 runs in three T20Is in the West Indies. He is approaching 34 and a few more poor knocks could well see him out of the setup with many youngsters waiting in the wings.