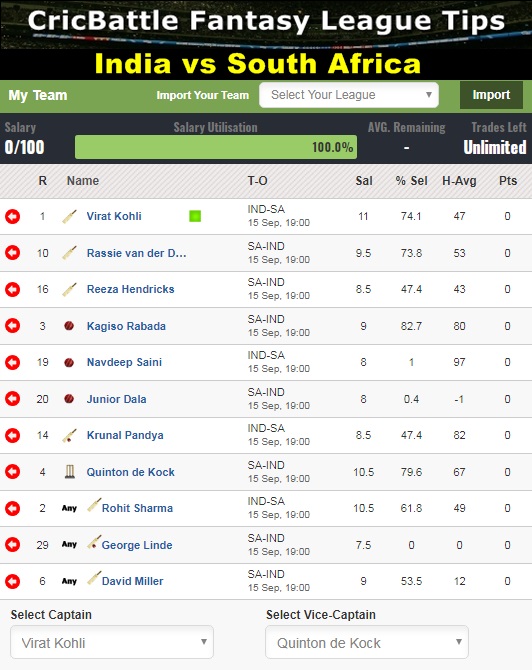 India vs South Africa on September 15

Team India will embark on its home season on Sunday with the commencement of the T20I series against South Africa. The visitors are playing their first series after the World Cup and the players have enjoyed a decent amount of rest. They are without their regular skipper Faf du Plessis for this series and Quinton de Kock will lead South Africa. This is also a chance for the Proteas to build towards the T20 World Cup next year. India, on the other hand, are coming off an impressive West Indies tour where they didn’t lose a game across the formats. Moreover, the selectors have gone with an almost the same squad thereby extending the rest for the likes of Kuldeep Yadav and Yuzvendra Chahal from the format. While the batting line-up is filled with the superstars, the bowlers are too inexperienced in the absence of Bhuvneshwar Kumar and Jasprit Bumrah.

Top captains & vice captains – Virat Kohli was the team's best batsman in the West Indies series and will look to carry on the same form in this series. With 106 runs in 3 matches, Virat Kohli had led his team from the front in the T20I series against West Indies. The right-handed batsman will once again look to dominate proceedings when he locks horns with Kagiso Rabada and co. The skipper, Quinton de Kock will have to lead his young unit from the front as he has a good record against India and he also has done well in the Indian Premier League.. The newly appointed captain would have a lot of expectations on his shoulders; he would be carrying a very heavy load for the Proteas in the aftermath of a disastrous World Cup.

Smart pick – Kagiso Rabada was expected to deliver in the World Cup, however, he couldn’t live up to the expectations. The speedster started well against India and then his performances went down. He wasn’t running in and was far from his best. He was also accused of playing in the previous IPL. Nevertheless, bearing in mind the damage he can do, it’ll be foolish to write the pacer off.

Cautions Pick – Hardik Pandya hasn’t played any cricket after the World Cup and it would understandable if the swashbuckler turns out to be a tad rusty. The Baroda all-rounder has grown into a powerful hitter and can ruffle a few feathers with the ball in hand as well.