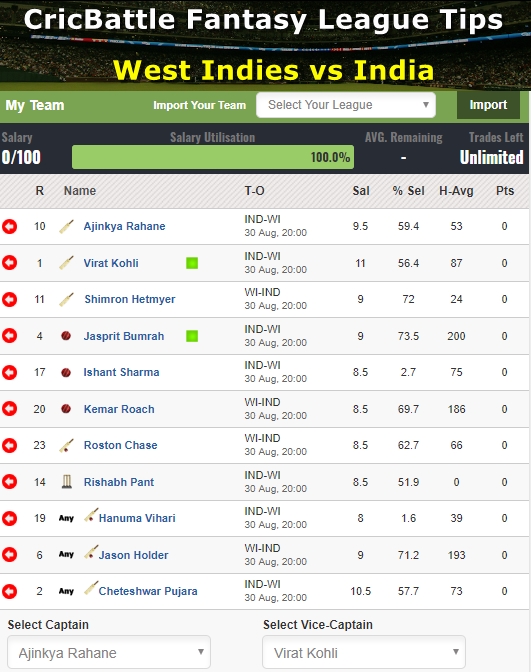 West Indies vs India on August 30

Following a resounding run in white-ball cricket, India continued their domination over the Windies in the Test series. Virat Kohli and Co made a stuttering start, but gradually got the measure of the conditions. The visiting team won by 318 runs at the Sir Vivian Richards Stadium, North Sound, Antigua. Apart from the 1-0 lead, India also managed to grab 60 points in the ICC World Test Championship. The second Test is now scheduled to get underway on August 30 at the Sabina Park, Kingston, Jamaica. Kohli’s men are the firm favourites to finish with 120 points in the championship. Though there will be a temptation to go in with an unchanged eleven, India will want to give opportunities to few of the other four players, who didn’t make the playing eleven for the opening encounter.

Best economical pick – Hanuma Vihari had a reasonable outing and the 128-ball 93 he got in the second innings will keep him in good stead.

Top captains & vice captains – Ajinkya Rahane has blown a tad hot and cold in the last few Tests of his career. But he turned out to be India’s leading run-scorer in the opening game with scores of 81 and 102. He got a ton in the format after a couple of years and his knock in the first innings pulled India out of the pits from a score of 25 for three. Rahane needs to show some consistency, which has been an issue for him. Virat Kohli notched a fifty in the second innings after a failure in the first. However, he was far from his very best considering the standards he has set for himself over the period of time.

Smart pick – Though the consistency factor has eluded Roston Chase he has invariably enjoyed his time against the Indian team. Last time he stroked a match-saving ton at the Sabina Park when the visitors were on the cusp of victory. Even in the previous game, he was the most assured batsman for the home team. He has also improved his off-spin bowling which is a good sign for the Windies.

Cautions Pick – Right now KL Rahul has put the team management in a pickle. Most of the time he has successfully tackled new-ball spells but then he falters to convert his starts. He has been a given rope so now it is time for him to repay the faith shown on him.