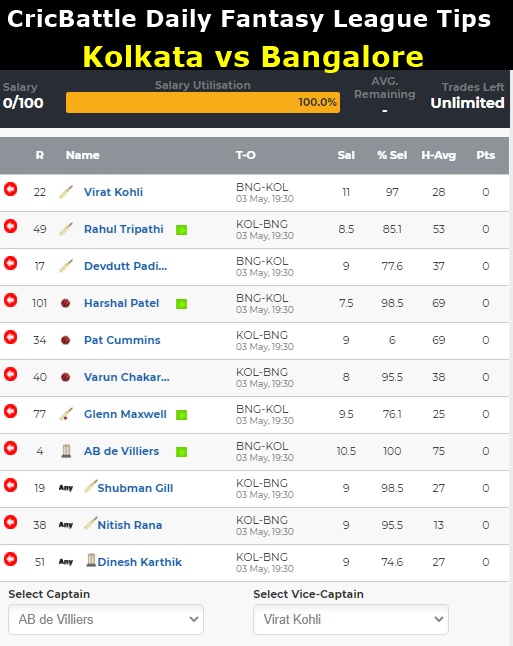 CricBattle Daily Fantasy Cricket League Tips
Kolkata vs Bangalore on May 3
The Royal Challengers Bangalore (RCB) started the 2021 Indian Premier League (IPL) with four wins on the trot. However, the Virat Kohli-led unit has stuttered a wee bit after losing two out of their last three games. Even in the game against the Delhi Capitals (DC), they got over the line by a solitary run. In their next match, they would be up against the Eoin Morgan-led Kolkata Knight Riders (KKR). After beating them at the Chepauk, the Challengers would be looking to put forth a similar show even at the Narendra Modi Stadium in Ahmedabad. The Knights, on the other hand, lost their previous game at the hands of the Capitals and are placed sixth in the table. They need a win desperately to make their way up the points, but the task won’t be easy against the in-form RCB.
Best economical pick – Rahul Tripathi has been batting at three and is the only batsman who has looked to up the ante in the top order. Tripathi just needs to be a bit consistent and he can be a superb Fantasy pick. Tripathi has scored 187 runs in seven matches so far at a strike-rate of 135.50 and can clearly earn a lot of Fantasy points on his day.
Top captains & vice captains – AB de Villiers couldn’t get going in RCB’s previous match, but the threat he poses to the opposition can’t be undermined. In seven games, he has scored 207 runs at an average and strike rate of 51.75 and 164.28 respectively. Against the Knights, the 37-year-old has notched 511 runs at an average and strike rate of 39.31 and 156.27 respectively. The focus will again be on the right-hander. Virat Kohli hasn’t looked at his best at all. He played a few crunching strokes in the last game but lost his touch soon. But his big knock is not far away having scored 198 runs in seven matches thus far at a strike-rate of 121.47.
Smart pick – Harshal Patel has been exceptional for the Challengers at the death. Though he went for quite a few runs in the previous game, overall, numbers are worth envying. In seven games, the fast bowler has 17 wickets to his name at an economy of 9.17. In RCB’s last meeting against the Knights, the pacer bowled beautifully in the death overs as he picked up two wickets, conceding a mere 17 runs.
Cautious Pick – The RCB skipper has shown faith in Rajat Patidar’s abilities, which might lead him to hold his spot. But RCB might be tempted to give a look-in to Washington Sundar to counter KKR’s left-handers.
My XI – AB de Villiers (Captain), Virat Kohli (Vice-Captain), Rahul Tripathi, Harshal Patel, Devdutt Padikal, Pat Cummins, Varun Chakaravarthy, Glenn Maxwell, Shubman Gill, Nitish Rana, Dinesh karthik
Blog Comments