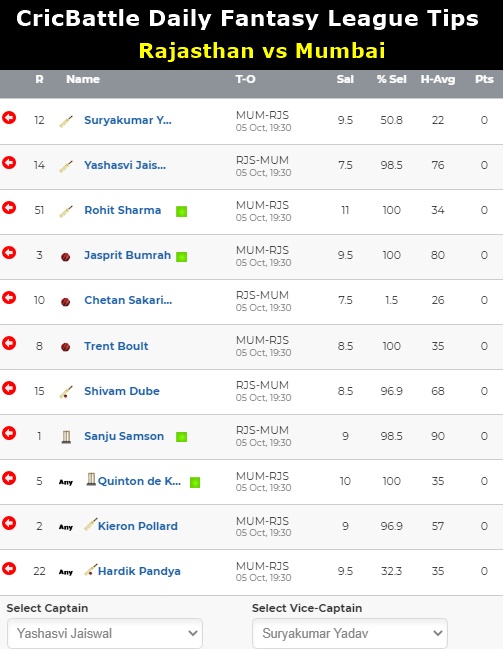 Rajasthan vs Mumbai on October 5

The Indian T20 League 2021 has entered its last week of league stage games. Rajasthan and Mumbai will be facing off against each other to stay alive in the tournament. Thanks to their poor net run-rate, a loss will end one of the teams’ hopes of making it to the playoffs. Rajasthan will be confident after thumping Chennai in the previous game having chased down 190 without much fuss. Mumbai, on the other hand, have struggled for consistent performances this season. They lost to Delhi in the erstwhile encounter and would be desperate for an ideal outing in this game. They have struggled on a slow Sharjah surface in this leg and their batsmen should step up to complement the bowlers’ good show.

Best economical pick – Shivam Dube, who spent the early days on the bench in the second leg of the IPL, finally got his chance against Chennai Super Kings and proved his selection in an excellent manner. He took on the bowlers and smashed unbeaten 64 runs from 42 deliveries.

Top captains & vice captains – Yashasvi Jaiswal played a blinder of a knock against Chennai. He smashed a 19-ball half-century, the second fastest ever for an uncapped player in the IPL, in the powerplay itself. Once again, the first six overs will be crucial on a slow pitch in Sharjah and Jaiswal can take on the Mumbai bowling which is already under a lot of pressure. Suryakumar Yadav showed signs of returning to his usual form in the last game against the Delhi Capitals. He batted freely and scored a handy 33 runs from 26 deliveries. Mumbai Indians will be expecting big runs from him in this match.

Smart pick – Sanju Samson is in the race for Orange Cap. The Rajasthan skipper has had an outstanding IPL 2021, where he has mustered 480 runs in 12 matches at an average of 48, which includes one century and 2 half-centuries.

Cautious Pick – There is no doubt that Akash Singh is a talented bowler, but considering there are better options in the bowlers’ slot, it’s better to avoid him while making your fantasy teams.