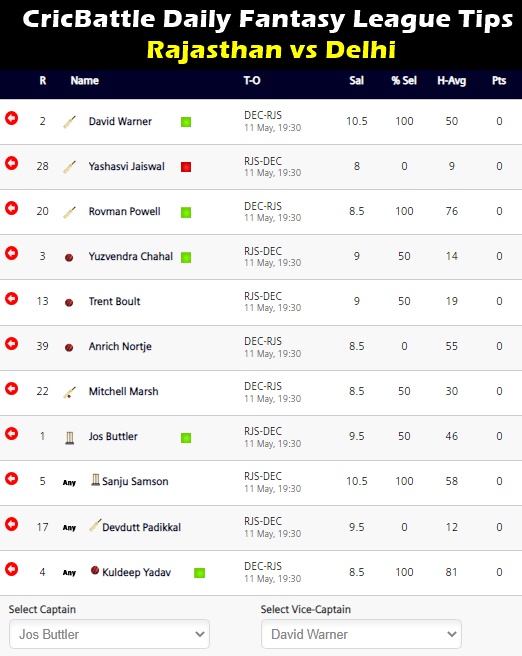 Rajasthan vs Delhi on May 11

The Rajasthan Royals will be locking horns with Delhi Capitals in Match 58 of IPL 2022 at the DY Patil Stadium in Navi Mumbai on May 11. Rajasthan would be hoping to strengthen their playoffs hopes with yet another win under their belt. They have so far won seven matches and have 14 points to their tally. The Royals had also got the better of the Capitals in the reverse fixture of the northern derby by 15 runs. DC has a lot of work to do if they are to make a fourth straight playoff appearance. After their heavy 91-run loss to the defending champions Chennai Super Kings, all the Rishabh Pant-led side can do is to ensure that they slip no further from here on and win all their remaining fixtures. The players would now be hoping to click well as a unit after having an off-day in the previous fixture where they were completely outplayed in all departments.

Best economical pick – Y Jaiswal scored 68 and bagged the Man of the Match award in the game against Punjab Kings. He was called back into the playing XI and has delivered on his comeback game.

Top captains & vice captains – Jos Buttler is enjoying a dream run this season and is sitting comfortably on top of the Orange Cap list with 618 runs from 11 matches. So it is a no-brainer that the Englishman would be expected to once again lay a solid foundation by providing a brisk start for the inaugural edition’s winners. Jos already has three centuries to his name this year and would be hoping for a fourth one and fifth overall in the IPL. David Warner scored a brilliant 92 against SRH. Against CSK, in the big run-chase, he scored just 19. However, he will continue to open the batting given that he is a big hope for the side in the last few games. The southpaw has scored 375 runs in 9 matches so far for Delhi Capitals.

Smart pick – The best thing for Rajasthan Royals is that they have both the Orange and the Purple cap holders on their side. Wrist-spinner Yuzvendra Chahal is enjoying an outstanding season having registered 22 scalps to his name from 11 matches. The leggie might have gone wicketless on a couple of occasions but, can provide some unexpected setbacks to the opposition in the middle overs.

Cautious Pick – As per the latest developments, Shimron Hetmyer has left the Rajasthan Royals camp for the imminent birth of his first child. You can avoid him in your fantasy team for this match.