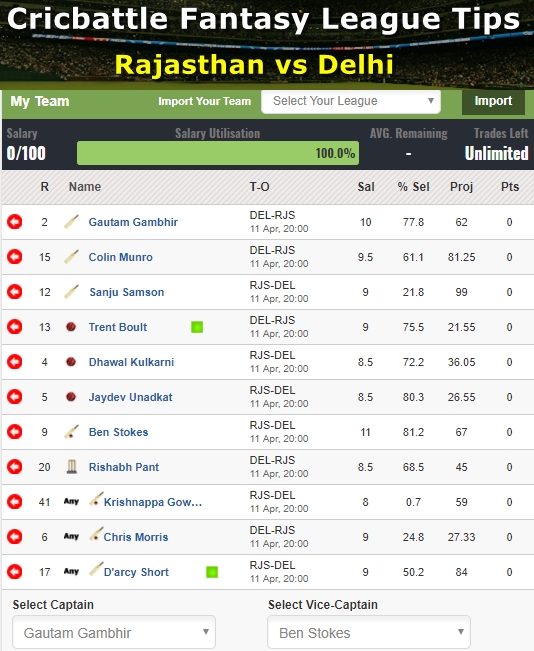 Rajasthan vs Delhi on April 11

Delhi Daredevils suffered a heavy defeat against the Kings XI Punjab in their first game of the IPL 2018. It was a day of mixed performances for the DD camp. Their batting clicked really well with Gautam Gambhir leading from the front. However, they were blown away by the attacking gameplay of the KXIP batters on the day. Now, the team has had a day off and are set to take the field again. Royals put up an absolutely lackluster show against Sunrisers Hyderabad the other day as they were handed a nine-wicket loss by the home team. The skipper Ajinkya Rahane would also love to end on the winning side as he starts to get settled into the new role. The home side Royals will hope for a winning start while Delhi will launch their bid for their first win in IPL 2018.

Best economical pick – Sanju Samson looked in great touch in the last game against SRH. He played exceptionally well and punished the bad deliveries. Samson missed his half century by just 1 run and scored a brilliant 49 off 42 balls before losing his wicket to Shakib Al Hasan.

Top captains & vice captains – Gautam Gambhir was excellent in the first game and played an anchoring role in the innings for DD. Gambhir, who has the most number of fifties in the IPL, would hope to continue on the same good form in the game against the Royals. Ben Stokes looked jaded in the opening game and would’ve to make his presence felt in this game. It is understandable that the all-rounder is taking time to settle. If he strikes form at the right time, Royals will start to look a completely different unit much like Rising Pune Supergiant looked last year.

Smart pick – Colin Munro has to fire at the top for Delhi at any cost if they have to post a good total on the board or chase. He is the only batsman in the lineup for them who can take the attack to the opposition after which the middle-order can pounce on. Munro is one of the dangerous batsmen in the shortest format of the game and he would be eyeing this game to make up for his poor show in the first game.

Cautious Pick – Amit Mishra had a very bad day at office in the previous game. KL Rahul had smashed him all round the park. In the game against Royals, one could expect another veteran cricketer, Shahbaz Nadeem, replacing Mishra in the playing eleven. So it will be a risk if you pick Mishra in your fantasy team.