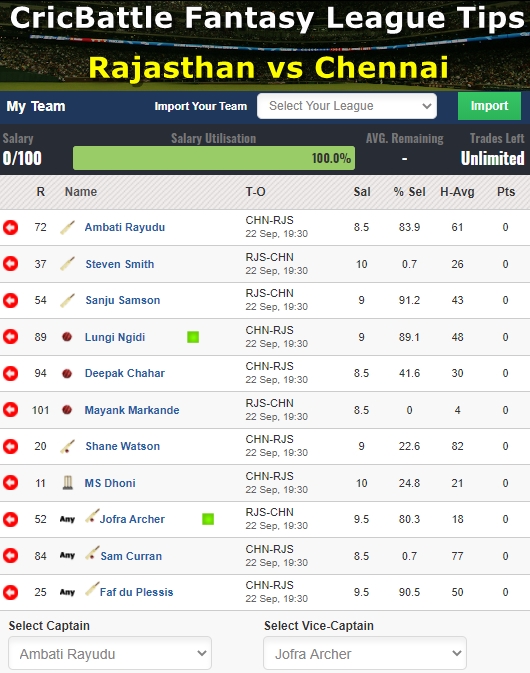 Rajasthan vs Chennai on September 22

In the 2008 edition of the Indian Premier League, Rajasthan Royals managed to beat the Chennai Super Kings as many as three times. But from there on, CSK, led by MS Dhoni, have come out trumps in 14 out of 19 matches. And it’s pertinent to note that the Royals have never beaten the Super Kings at a neutral venue. In recent times, it’s CSK, who have dominated them largely. The two teams are now set to lock horns at the Sharjah Cricket Stadium on Tuesday, September 22. Dhoni’s men are already brimming with confidence after their five-wicket victory over defending champions Mumbai Indians. The Royals couldn’t make the playoffs last time around and Steve Smith and Co would be desperate to get off to a winning start, though the task won’t be easy.

Best economical pick – Sam Curran wasn’t the standout performer, but it was his cameo of 18 off six balls that guided the Super Kings over the finishing line in the opening game. He hit a four and two sixes and played at a strike-rate of 300. He also pinned Quinton de Kock and gave away only 28 runs at a decent economy rate of seven.

Top captains & vice captains – Ambati Rayudu was at his very best and was the primary reason behind CSK’s triumph in the opener. He scored 71 off 48 with six fours and three sixes. He seemed confident and even used his feet to Jasprit Bumrah. In the end, he got out to Rahul Chahar after putting his team on the driver’s seat. Jofra Archer has been in the news for various reasons over the past few months, and recently, seems to have found the form that made him one of the most dangerous bowlers in the world last year. Archer will be the go-to man in IPL 2020. He might even contribute with the bat.

Smart pick – Shane Watson may not have performed against MI, but he is too good a player to be bogged down for a long period of time. Also, his numbers against the Royals are promising. In four matches since 2018, the right-hander has 158 runs against them at an average and strike-rate of 39.50 and 150.48 respectively. He also has a century against them and the Royals can’t afford to undermine him.

Cautious Pick – Jos Buttler going to miss this match, as he is currently undergoing mandatory quarantine after arriving in the UAE along with his family. His quarantine period differs from other English and Australian players, as they had arrived straight from the bio-bubble for their limited-overs series in the UK to the IPL's bio-bubble.