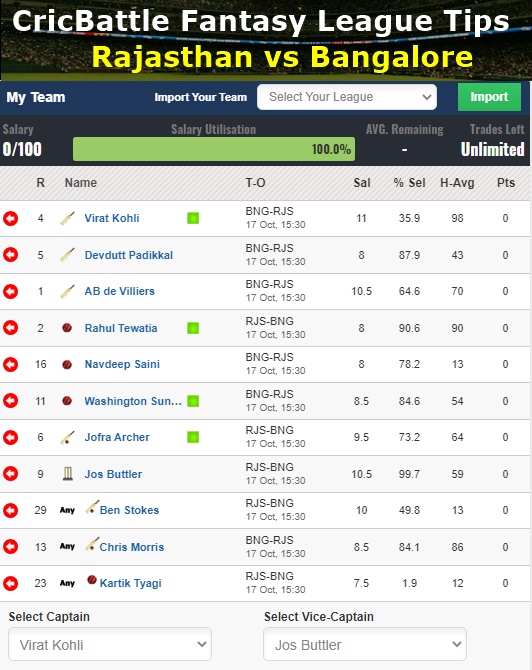 Rajasthan vs Bangalore on October 17

Rajasthan Royals have lost their way, without a doubt, after their initial two victories in Sharjah. At the present point in time, the team, captained by Steve Smith, is languishing at seventh in the points table with six points from eight matches. They have had their chances against the Delhi Capitals but ended up losing the match by 13 runs at the Dubai International Cricket Stadium. In a bid to turn their campaign around, the Royals would next be facing the Royal Challengers Bangalore on Saturday, October 17 in Dubai itself. Though on the head-to-head count, the Royals are ahead, in their previous face-off, Virat Kohli and Co beat them comprehensively by eight wickets. The Challengers, on the other game, faced defeat against the Kings XI Punjab in Sharjah.

Best economical pick – With three fifties in the tournament so far, Devdutt Padikkal has arguably been the breakout star and the find for RCB. Padikkal began his innings promisingly against Kings XI Punjab, hammering a six and a four before spooning one to extra cover. The southpaw departed for 18 off 12 deliveries and scored a half-century in the last meeting against Rajasthan.

Top captains & vice captains – Virat Kohli started the tournament, scoring 18 runs in his first three outings. But he has started to find his rhythm and currently averaging around 60 with a top score of 90 against Chennai Super Kings. In fact, he got back to form with a half-century against the Royals itself. Being one of the key players for RCB it remains to be seen whether or not he can replicate something similar. Jos Buttler has given glimpses of his very best, playing some audacious strokes. But apart from his 70 against the Mumbai Indians, he is yet to find his feet in the tournament. In seven matches, the right-hander only has 168 runs at an average and strike-rate of 24 and 154.12 respectively. But bearing in mind that the next match is in Sharjah, Jos can be expected to put his best foot forward.

Smart pick – Jofra Archer is playing as the allrounder this season. His small but impactful innings with the bat have helped Rajasthan Royals to put a good score on the board. The pacer has picked up 12 wickets in eight matches at the economy rate of 6.56 while has scored 89 runs at the strike rate of 202.27.

Cautious Pick – Steve Smith started the season like a firestorm, but after the first two matches, he has fizzled out. In last season as well, after playing the first few impressive knocks, he struggled to bat in the next matches.