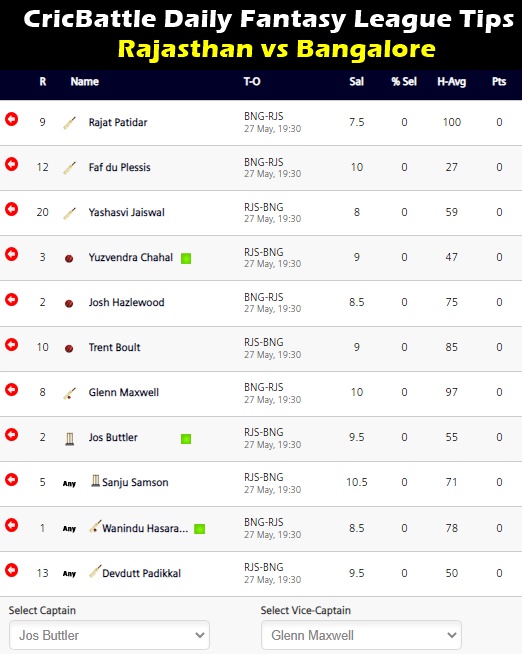 Rajasthan vs Bangalore on May 27

The much-awaited Qualifier 2 of the IPL will be played between the Rajasthan Royals (RR) and Royal Challengers Bangalore. The match will be played at the Narendra Modi Stadium, Gujarat on May 27 (Friday). Both teams have played some excellent cricket throughout the tournament and are now just one step away from reaching the all-important final match of the tournament. While RR lost their Qualifier 1 match against the new entrants Gujarat Titans (GT), the Red Army beat the other new team Lucknow Super Giants (LSG) to seal their place in Qualifier 2. It is going to be an exciting contest with several star players including Jos Buttler, Sanju Samson, Virat Kohli, and Faf du Plessis among other players to play in the contest.

Best economical pick – Rajat Patidar has settled himself in the no.3 position for the RCB XI by scoring some crucial runs with a strike of 156.25. He smashed his maiden IPL ton in the Eliminator game against LSG, scoring an unbeaten 112 off 54 balls. Overall, he has scored 275 runs in six innings at an average of 55.

Top captains & vice captains – Sitting right at the top of most runs list, England and RR batter Jos Buttler will want to play an impactful inning in the Qualifier 2 match. The right-handed batter has stroked 718 runs so far and will want to make his team qualify for the final match of the tournament. Glenn Maxwell has contributed with both the bat and ball whenever the team has needed him. So far, he has 277 runs in 12 innings at a strike rate of 167.87. He has also grabbed six wickets so far with his off-spin. RCB Management will hope for a “Big Show” from him in these coming matches.

Smart pick – The Purple Cap holder in IPL 2022, Yuzvendra Chahal will be playing against his former franchise once again and will want to provide vital breakthroughs to his new franchise RR. The leg-spinner has scalped a total of 26 wickets so far and will want to add a few more in his column.

Cautious Pick – Rajasthan Royals have done a lot of experiments with their batting lineup and that has been one of the reasons behind RR’s successful run. Riyan Parag is batting in the lower middle-order and has not got many opportunities to showcase his skills. In the last 5 matches, Riyan has not been able to score more than 20 runs.