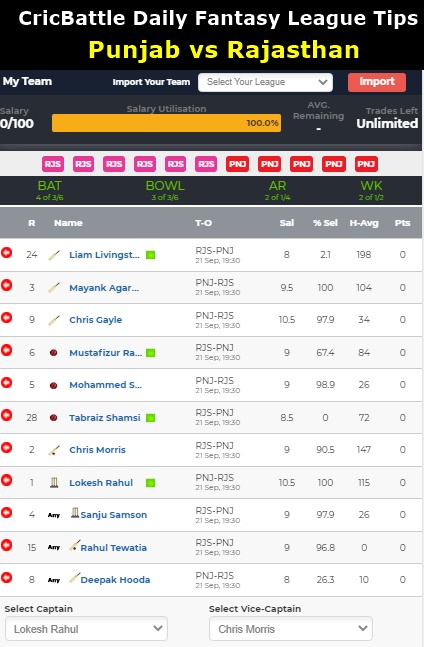 Punjab vs Rajasthan on September 21

Punjab Kings and Rajasthan Royals are set to face each other in Match No.32 of the 2021 Indian Premier League on Tuesday, September 21 at the Dubai International Cricket Stadium. The Royals were jolted with a blow as Jos Buttler, Ben Stokes, and Jofra Archer won’t be featuring for them. However, they have roped in South Africa’s Tabraiz Shamsi, the ICC’s no.1 ranked T20I bowler. Moreover, the Royals have Mustafizur Rahman, who was in scintillating form in the matches against New Zealand and Australia. The Royals are placed at fifth in the points table with six points. The Kings, on the other, have had their travails as well. However, they managed to rope in England leg-spinner Adil Rashid to strengthen their bowling. Dawid Malan’s departure will deplete their batting to some extent. The Kings are precariously placed at the sixth spot in the points table.

Best economical pick – Liam Livingstone is likely to open the innings for Rajasthan Royals in Jos Buttler’s absence. He is a tremendous striker of the cricket ball and has performed well for England in recent times.

Top captains & vice captains – KL Rahul was in excellent form in the first phase of the Indian T20 league. The Punjab skipper scored 331 runs in 7 innings and plundered his runs at an average of 66.20 and a strike rate in excess of 135. He will once again hold the key for the Punjab side in their first match of the second leg against Rajasthan. Chris Morris is the leading wicket-taker for the Rajasthan side in the 2021 edition of the Indian T20 league. The 34-year-old picked up 14 wickets in Phase 1 of the tournament and scalped his wickets at a strike rate of just 11.14.

Smart pick – Mustafizur Rahman is currently in the form of his life. In 2021, he has picked up 18 wickets in T20Is from 11 matches. Moreover, he was literally unplayable in the T20Is against Australia and New Zealand. Against the Aussies, he bowled at an economy of less than four. In the 2021 IPL, the Satkhira-born has picked up eight wickets at an economy rate of 8.29.

Cautious Pick – Moises Henriques has played 3 matches so far in this year’s IPL and has managed to score only 16 runs in 2 innings. It’s better to avoid him while making your fantasy teams.