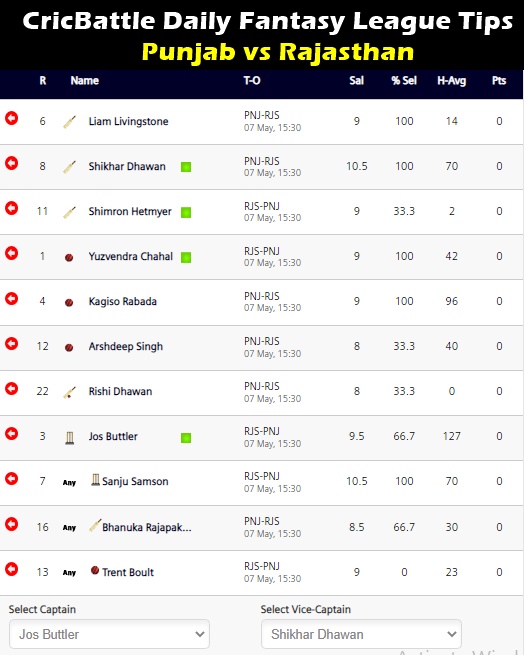 Punjab vs Rajasthan on May 7

Punjab and Rajasthan are all set to lock horns against each other in the Indian T20 League fixture on Saturday. Punjab returned to winning ways after they secured a convincing eight-wicket victory over Gujarat. On the other hand, Rajasthan succumbed to their second successive defeat against Mumbai, losing by seven wickets. The race for the playoffs is getting tighter, as five teams are separated by just two points. A win for Rajasthan could perhaps take them above Lucknow on the points tally, into the second place. Meanwhile, Punjab is placed seventh in the points tally, with five wins and losses each from their ten games.

Best economical pick– Rishi Dhawan made his way into the team after recovering from injury and the team also needed an experienced pace-bowling all-rounder. In three appearances, he has taken three wickets and has scored 21 runs. In the previous match, his bowling was quite economical as he gave away just 26 runs in his four overs and took one wicket.

Smart pick – Liam Livingstone is a very destructive player and has shown good form scoring 293 runs in 10 matches at a strike rate of 186. He can also chip in with a few overs of spin.

Cautious Pick – Mayank Agarwal has demoted himself down the order and is not in the best of form with the bat, hence avoid him for this match.