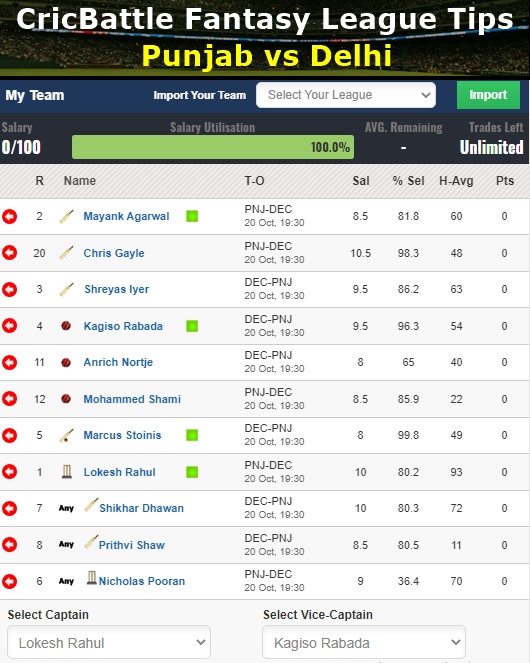 Punjab vs Delhi on October 20

Kings XI Punjab managed to give themselves some breathing space, beating the Mumbai Indian in a thrilling Super Over affair in the 2020 Indian Premier League. However, KL Rahul and Co still have work do as they are placed sixth in the points table. From their next five games, KXIP need a minimum of three wins to have any chance of getting into the top four. They will next be facing the Delhi Capitals on Tuesday, October 20 at the Dubai International Cricket Stadium. The last time when the teams met, the Capitals came out trumps in the one-over eliminator. For the time being, Shreyas Iyer’s DC are on a rampage, being the table-toppers with seven victories from nine matches. Another victory would virtually seal them a berth in the playoffs.

Best economical pick – With 393 runs from nine matches, Mayank Agarwal is second in the run-getters list in IPL 2020. Mayank Agarwal has been responsible for providing fiery starts to Kings XI Punjab at the top order and his strike rate of 159.10 is the highest amongst the top five run-scorers in the current edition. The right-handed batsman also scored the winning runs against Mumba Indians in the second super over.

Top captains & vice captains – KL Rahul has been in riveting form in the ongoing edition of the T20 tournament. The right-hander has scored over 500 runs and also notched a match-winning half-century against the Capitals. In fact, he had scores of 74, 61*, and 77 in the last three games. In his previous game versus DC, he managed only 21 runs. But keeping in mind hid current form, he can turn out to be a brute force. Kagiso Rabada has the Purple Cap with 19 wickets from nine games and he is most likely to end as the leading wicket-taker as well. He bowls at an economy rate of 7.68, but it’s because he bowls in the powerplay and at the death when the batters try to go for the big shots. The last time the South African pacer played against DC, he pinned the dangerous Maxwell and Krishnappa Gowtham.

Smart pick – Anrich Nortje has been one of the brightest shining lights for the Delhi Capitals this season. The tearaway fast bowler has cranked up the pace and he has done that with searing consistency in his line and lengths. In 9 games, Nortje has taken 12 wickets at an average of 23.25 and an economy rate of 7.75.

Cautious Pick – Glenn Maxwell had a highly forgettable encounter as Rahul Chahar took him out for a duck in the second ball he faced. Even after losing Nicholas Pooran, Kings XI Punjab seemed in a position of power; however, Maxwell wicket set them back significantly.