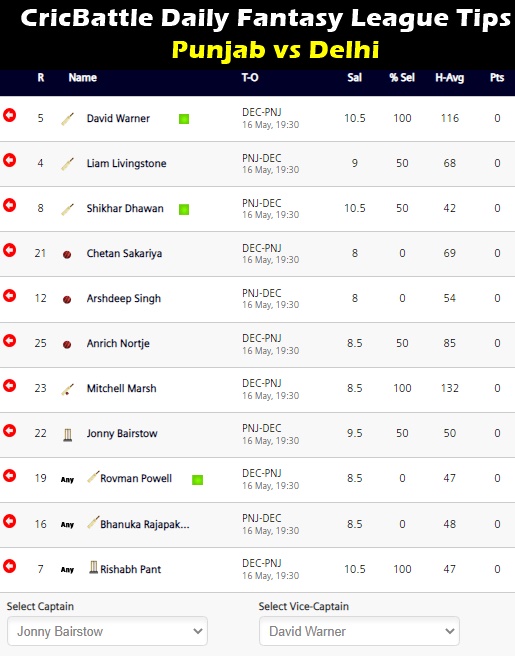 Punjab vs Delhi on May 16

After winning their previous encounter, Punjab Kings (PBKS) will face a strong opponent in form of the Delhi Capitals (DC) in their next group stage match of the Indian Premier League 2022. The encounter will take place at the Dr. DY Patil Sports Academy, Mumbai on May 16 (Monday). Not only PBKS, but DC are also coming into the contest after winning their previous match and would want to continue their winning run in the tournament. While PBKS defeated the Royal Challengers Bangalore (RCB) in their previous match by 54 runs, DC crushed the Rajasthan Royals (RR) by eight wickets and ensured that they remain in the hunt for the play-offs. Both PBKS and DC have been playing some good cricket in patches and will want to perform on a consistent basis as the tournament is coming to the business end. This is a must-win encounter for both teams and a loss will more or less end their hopes of making it to the top four.

Best economical pick – The left-arm pacer Chetan Sakariya scalped two crucial wickets and gave away just 23 runs in his four-over quota against RR. The 24-year-old has the ability to extract massive swing from the new ball and will want to take some crucial wickets for his side in the upcoming encounter.

Top captains & vice captains – After enduring a few poor outings, the Englishman Jonny Bairstow has roared back to form with two back to back fifties. The right-handed batter totally demolished the RCB bowling attack in the previous match and will want to emulate his performance in the upcoming encounter as well. David Warner has made 2 half-centuries in the last 5 matches. Warner is the leading run-scorer for Delhi Capitals this season. He has made 427 runs in 10 matches at an average of 61 and a strike rate of 152.50 including 5 half-centuries.

Smart pick – Liam Livingstone has been an excellent performer for PBKS this season and is their second-highest run-scorer. Livingstone has made 385 runs in 12 matches at an average of 35 and a strike rate of 180.75 including 4 half-centuries. Livingstone made 70 runs off 42 deliveries in the previous match.

Cautious Pick – Srikar Bharat was dismissed for a duck in the last game. He might have to pave way for Prithvi Shaw in this game and hence, he is one player whom you can avoid in your fantasy team for this match.