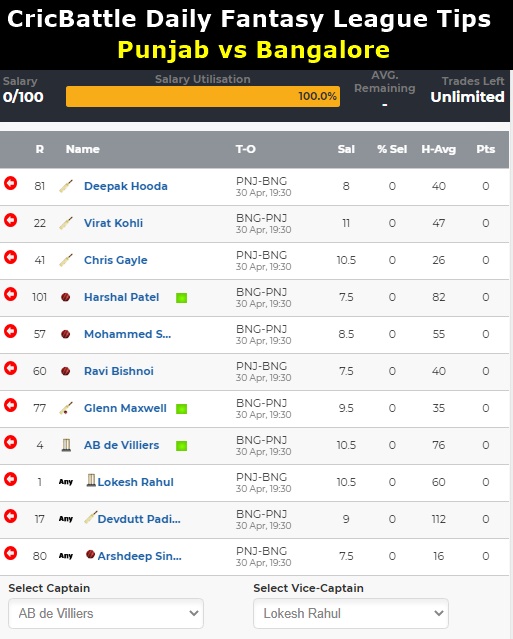 Punjab vs Bangalore on April 30

The 26th match of VIVO IPL 2021 will be played at Narendra Modi Stadium, Ahmedabad between Punjab Kings (PBKS) and Royal Challengers Bangalore (RCB). Both the teams have played 6 games in this season so far, out of which, Punjab Kings have won 2 games while Royal Challengers Bangalore have won 5 games. Punjab Kings is currently positioned at the 6th spot on the points table with two victories out of 6 games. In their last game against Kolkata Knight Riders (KKR), the team faced yet another defeat. After losing the toss, the team was invited to bat first, in response to which the team scored a below-par total of 123 runs. Mayank Agarwal scored a slow inning of 31 runs off 34 deliveries. Chris Jordan scored 30 runs off 18 deliveries towards to end to help them cross the 120-mark. KL Rahul and Nicholas Pooran scored 19 runs each. While defending this total, the opposition easily chased down this total with more than 3 overs remaining. Moises Henriques, Mohammed Shami, Arshdeep Singh, and Deepak Hooda picked one wicket each. The team has grave issues in middle-order as players are not performing consistently and the team must be looking to resolve these issues as the team cannot afford many losses at this stage of the tournament. Talking about Royal Challengers Bangalore, this team is currently at 2nd place on the points table with 5 wins out of 6 games. In their last game against Delhi Capitals (DC), the team won the game in a heart-stopping encounter on the last ball of the final over by 1 run. After losing the toss, the team was invited to bat first, in response to this, openers Virat Kohli and Devdutt Padikkal were dismissed early. Rajat Patidar scored 31 runs off 22 deliveries while Glenn Maxwell scored 25 runs off 20 deliveries. Toward the end, AB de Villiers scored a magnificent 75 runs off just 42 runs and led the team to a total of 171 runs. While defending the total, the game went into the final over where the team won the game by one run on the last ball. Harshal Patel picked 2 wickets, Mohammed Siraj picked 1 wicket along with one wicket from Kyle Jamieson. The team looks good and is also in promising form, and must be looking for another win on the trot. Out of a total of 26 encounters between the two teams, Punjab has won 14 games while Bangalore won 12 games.

Best economical pick – Deepak Hooda is chipping in with wickets as well as runs for his team. While he looked good with the bat in the first few games, the Punjab player has picked up 2 wickets in his last 2 games.

Top captains & vice captains – 37-year-old ‘youngster’ AB de Villiers is playing like he is enjoying the prime of his cricketing career. He scored 75 runs from only 42 deliveries in his last game against Delhi Capitals. KL Rahul has masterful numbers against the Bangalore-based franchise. In nine games, the right-hander has notched 371 runs at an average and strike rate of 74.20 and 155.23 respectively. His top score of an unbeaten 132 came last year in Dubai, leading PBKS to a win. In the ongoing tournament, Rahul has scored 240 runs at an average of 48 with three half-centuries to show for his efforts.

Smart pick – Harshal Patel, without much of a doubt, has been the standout batter for the Challengers in the tournament. He is currently the Purple Cap holder with 17 scalps from six games at a brilliant strike rate of 8.4. At the present point in time, he is picking up nearly three wickets in every game. Moreover, his economy rate of 8.50 isn’t the worst since the speedster mostly bowls at the death.

Cautious Pick – Yuzvendra Chahal has been the heart of the Royal Challengers Bangalore’s bowling over the years, picking up loads of wickets. Whenever they have done well, Chahal has always been among wickets. But it is amazing how other bowlers have done well in this season with their lead spinner not performing. This season he has picked up three wickets from six matches and in the lead up to the tournament, he didn’t have the best of forms.

Testimonials
Rassie van der Dussen has joined the team but he is yet to complete his quarantine. Are you guys adding him?Anish Reddy
I was a regular player. But Tamil Nadu Govt have banned online games.Whether this comes under online games Or not. Please clarify.Shankar Raman
View all