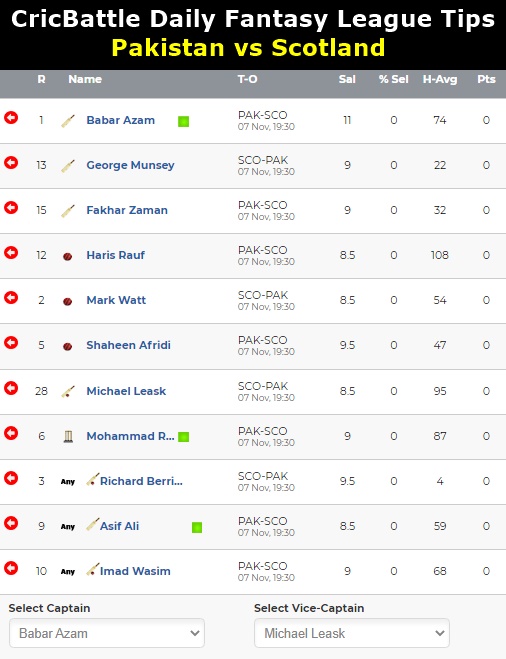 Pakistan vs Scotland on November 7

In a dead rubber game, Pakistan will take on Scotland in the penultimate Super 12 match of the T20 World Cup 2021 on Sunday. Pakistan know the UAE conditions better than any other team in this World Cup and have made the most of it. They are the first team from Group 2 to have secured a place in the semi-finals. The green shirts defeated India and New Zealand in their first two matches, which essentially was enough to confirm their berth. Scotland, on the other hand, have lost all of their 4 matches in the Super 12 stage and currently sit at bottom of the Group 2 table, with no points in their account. They were pretty ordinary with the bat against India and paid a hefty price for that, as they lost the match by 8 wickets with 81 balls to spare.

Best economical pick – Haris Rauf is the pick of the bowlers from Pakistan in this World Cup. He has got excellent variations and will be really effective in the middle overs. He has scalped 7 wickets in 4 matches in this World Cup, with the best figures of 4/22.

Smart pick – Mohammad Rizwan is the most consistent batter from the Pakistani team at the moment. He struggled initially against Namibia in the previous game and did well at the late end of the innings. He remained unbeaten on 79 runs from 50 balls, which comprised of 8 fours and 4 sixes.

Cautious Pick – Kyle Coetzer averages 12.5 with the bat in this tournament. It’s better to avoid him while making your fantasy teams.