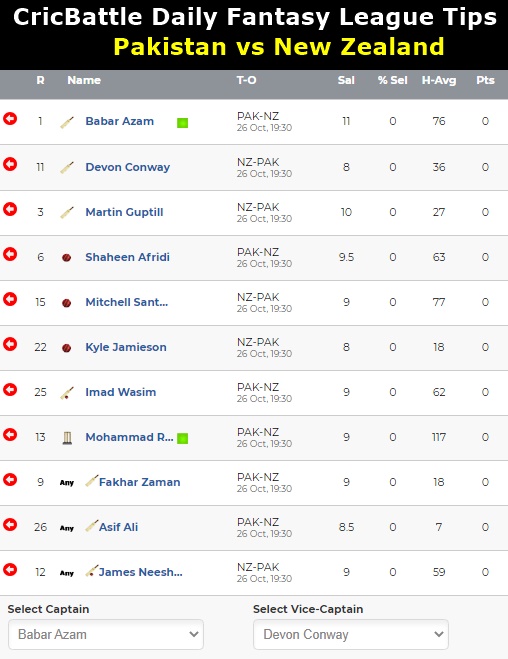 Pakistan vs New Zealand on October 26

New Zealand will begin their T20 World Cup campaign against Pakistan, who beat India by 10 wickets on Sunday. The chaos surrounding New Zealand's abandoned tour of Pakistan, at the very last moment, will add another layer of intrigue to the contest. Both teams will be keen to make it to the semi-finals, with the outcome of the game likely to go a long way in deciding who makes the cut. With some of the best T20 players in Babar Azam and Lockie Ferguson taking to the field, a cracking contest beckons in Sharjah.

Best economical pick – Mitchell Santner has been New Zealand's go-to spinner for quite some time with his stump-to-stump bowling and experience serving him well. Santner's handy batting ability also adds value to his case for an inclusion to your fantasy team.

Top captains & vice captains – Babar Azam is one of the best batters in the world with his numbers speaking for themselves. In fact, Azam's last outing against New Zealand in an ICC event saw him score a superb hundred, something he would love to replicate in this mouthwatering clash. Devon Conway has been brilliant throughout his tenure with the national side, with his ability to score big runs at a quick rate holding him in good stead. With Conway likely to bat in the top order, the southpaw should get the nod over Mohammad Rizwan, who isn't a bad option himself.

Smart pick – Shaheen Afridi had a breakout performance the last time he faced New Zealand in an ICC event. Since then, Shaheen has grown in leaps and bounds over the last two years. With his undeniable ability to pick up wickets in both the powerplay and death overs, Shaheen is a must-have in your fantasy team.

Cautious Pick – Glenn Philips failed to get going and scored in single digits in both the warm-up matches. Pick him in your fantasy team at your own risk.