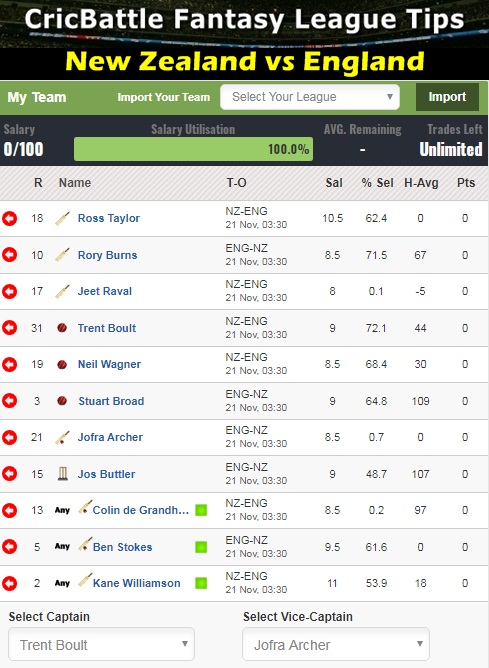 New Zealand vs England on November 21

New Zealand and England will take their cricketing rivalry into the Test arena Thursday after finding themselves evenly matched in recent limited-overs thrillers. England has bragging rights after winning a roller coaster World Cup final in July, then edging the Black Caps 3-2 in a desperately close Twenty20 series completed earlier this month. Both the one-day decider and T20 series needed tie-breakers to find a winner and there will be no shortage of mutual respect when the rivals face off again Thursday in the First Test. On paper, there again appears to be little to separate the teams, with New Zealand second in the Test rankings and England third. But England skipper Root is painfully aware that his team underperformed when it lost a two-Test series in New Zealand last year after underestimating the Black Caps' bowlers on their home turf. Pacemen Boult and Southee bundled the tourists out for 58 in the first innings of the opening Test as England tried to play what Root described as "fast forward" cricket. England’s skipper said his team would be taking a more measured approach this time, with batsmen placing an emphasis on protecting their wickets. New Zealand will also be bolstered by the return of captain Williamson who sat out the T20 series with a nagging hip injury. It will be the first Test match ever staged at Mount Maunganui’s Bay Oval, which has been hosting limited-overs internationals since 2014. The beachside venue is Wagner’s home ground and he said the wicket could take time to get used to.

Top captains & vice captains – Bowlers are key in Test matches played in New Zealand. Although batsmen have also done well in the recent past, Trent Boult and Jofra Archer should be able to stand out among their peers with a heap of wickets to their names. While both of them are good options for captaincy, Ben Stokes and Ross Taylor are also viable picks for the same, given their experience and form.

Smart pick & Best economical pick  –  Ben Stokes and Colin de Grandhomme are the preferred allrounders for this game with the option of Sam Curran also available. While Grandhomme has been scoring runs consistently for the Test side, his bowling could also prove to be successful on a helpful wicket. On the other hand, Ben Stokes is perhaps the best allrounder in world cricket and comes into this series on the back of a superb English summer. He is a must-have in any side and should be able to put in a good performance.

Cautions Pick – There's time enough for Joe Root to reverse his mid-career dip, but where there was once a Big Four among contemporary Test batsmen, there's now clear daylight between the best and the rest.