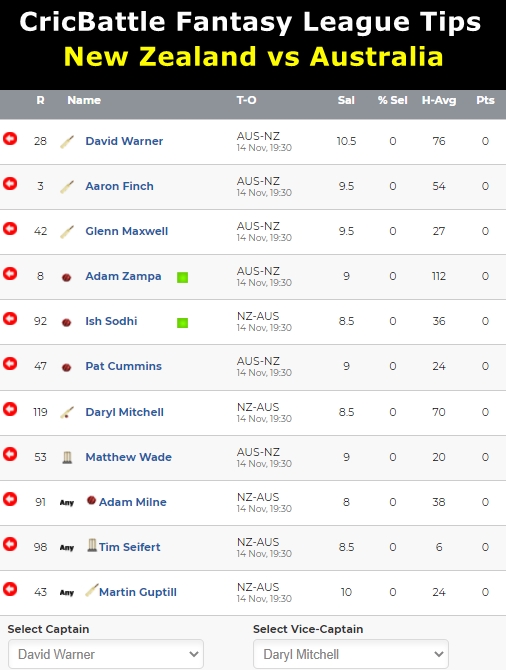 New Zealand vs Australia on November 14

New Zealand will take on arch-rivals Australia in the final of the T20 World Cup 2021 on Sunday. Kiwis have reached the final for the first time in T20 World Cup and will be dreaming of lifting the cup. With some phenomenal batting display from Daryl Mitchell, New Zealand defeated favorites England in the first semi-final. They will be aiming for their second major ICC title this year. Devon Conway has been ruled out of the final with a hand injury. Australia, on the other hand, were not the favorites to reach the finals, but they proved everyone wrong with some stellar all-round performances. Despite losing 5 wickets in the run-chase against Pakistan, the duo of Marcus Stoinis and Matthew Wade earned the Aussies a 5-wicket victory to cement their spot in the finals. Both sides are aiming for their first T20 World Cup title and we can expect a cracker of a contest between them.

Best economical pick – Matthew Wade played one of the best knocks of the tournament in the second semi-final against Pakistan and won the game for the Aussies. In 3 innings in this tournament, he has scored 74 runs at an average of 74.

Top captains & vice captains – David Warner has been in superb form in this tournament. The left-hander has scored 236 runs in this tournament and has scored his runs at an average of 47.20 and a strike rate of close to 150. Daryl Mitchell was outstanding in the semifinal clash between England and New Zealand. The right-handed batter stayed till the end and scored a superb 72* off 47 deliveries at the top of the order. Mitchell has scored 197 runs in the competition at an average of close to 40.

Smart pick – Adam Zampa is a special bowler in this format and has performed extremely well in this World Cup. He has scalped 12 wickets in 6 matches at an impressive economy of 5.69.

Cautious Pick – Mitchell Santner has been economical with the ball. However, he has scalped only 2 wickets in this World Cup. It’s better to avoid him while making your fantasy teams.