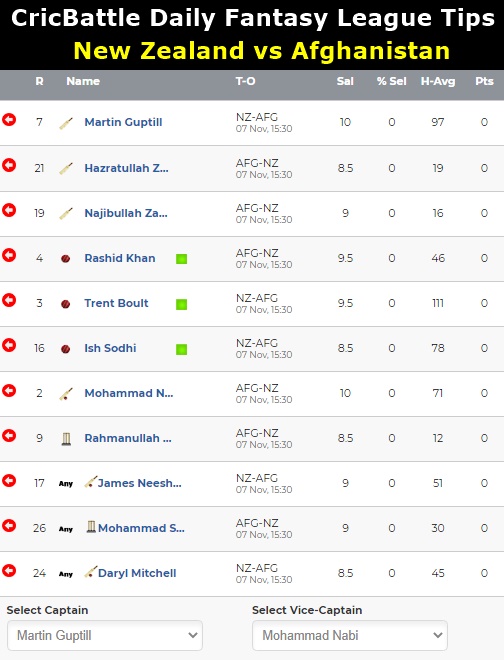 New Zealand vs Afghanistan on November 7

New Zealand will take on Afghanistan in the 40th match of the T20 World Cup 2021 on Super Sunday. Both sides are aiming to confirm their spot in the semi-finals, and this will be a must-win match for them. After losing their first match to Pakistan, New Zealand did extremely well to win their next three matches and will be confident of beating Afghanistan in this match. They are at the second spot in the Group 2 standings with 6 points. There are still some concerns with their batting and it needs to be addressed. Winning might not enough for Afghanistan. They must win this match by a huge margin to keep themselves in contention, with India expected to beat Namibia in the last Super 12 fixture. They lost badly India in their previous match by 66 runs. The Afghan bowlers were all over the place and didn’t bowl up to the expectations. With 2 wins and 2 losses, they are at the fourth spot in the Group 2 standings with 4 points.

Best economical pick – Hazratullah Zazai is a strong lad who can hit the ball hard if it’s in his zone. He has accumulated 90 runs in 4 matches in this tournament, at an average of 22.5 and a strike rate of 116.88.

Smart pick – Jimmy Neesham played a rescue act in the last game against Namibia. He scored unbeaten 35 runs from 23 balls, which turned out to be a match-winning one. He has even picked up a wicket as well.

Cautious Pick – Devon Conway is not in the greatest of forms in this tournament. He averages 15.66 with the bat, and hence, it’s better to avoid him while making your fantasy teams.