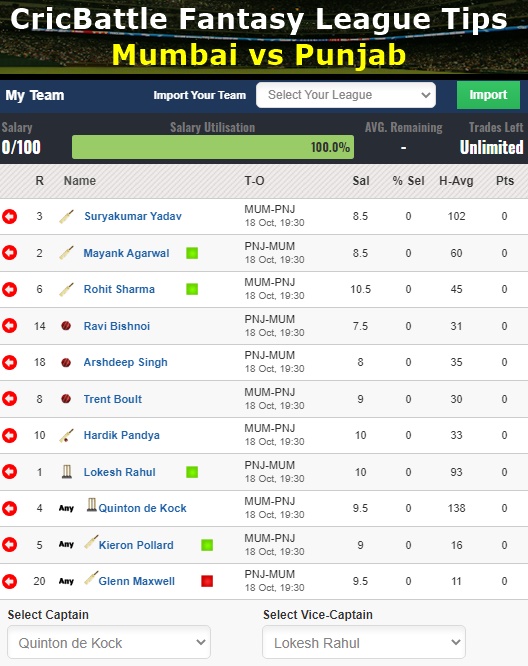 Mumbai vs Punjab on October 18

Mumbai won another game convincingly and this time it was Kolkata who were nothing in front of the quality they possess. They are back at the top of the table with twelve points in eight games. They restricted Kolkata below 150 and chased it comfortably with the help of an outstanding innings from de kock. They have been the best team of the tournament by far. However, most of their matches are outside Abu Dhabi from now and that is the only thing which can bother them. There is much nothing wrong with their team and are expected to go with the same XI against Punjab. On the other side, Punjab, finally, got a moment to cherish in their last game and they got back on track. They are still alive in the tournament and can be a very dangerous side. Their batters have been in top form with both the openers being the two leading run-scorers of the league. With Chris Gayle in, Punjab is a dangerous batting side. However, they would like to go with the same bowling line-up Shami in the powerplay and Jordan at the death. Murugan Ashwin and Ravi Bishnoi have been doing well together and are expected to continue to be in the XI.

Best economical pick – Suryakumar Yadav has looked real classy whenever he batted in this season. He played a couple of great knocks as well. However, he has had a few issues with his consistency. He scored 243 runs thus far and will be eyeing a big score in this match.

Top captains & vice captains – Quinton de Kock was slow to start in the tournament. But he seems to have got into his zone now and registered two fifties in the last two games. He was the ‘Man of the Match’ in the last match and is also the leading run-scorer for his team.  Kl Rahul is currently the leading run-scorer of the tournament with 448 runs at an average of 74.67. He has an average of 102 against Mumbai since 2018 at an excellent SR of 139.1.

Smart pick – Ravi Bishnoi has played in 8 matches and has taken 8 wickets while maintaining a bowling average of 30.12.

Cautious Pick – Nathan Coulter-Nile has been brought into the side in the last game in place of James Pattinson. The latter was rested keeping the workload in mind. Nathan looked slightly rusty in his first game and went for 51 runs. He is likely to be given another chance to keep him in the groove in case his services will be required in the later stages of the tournament.