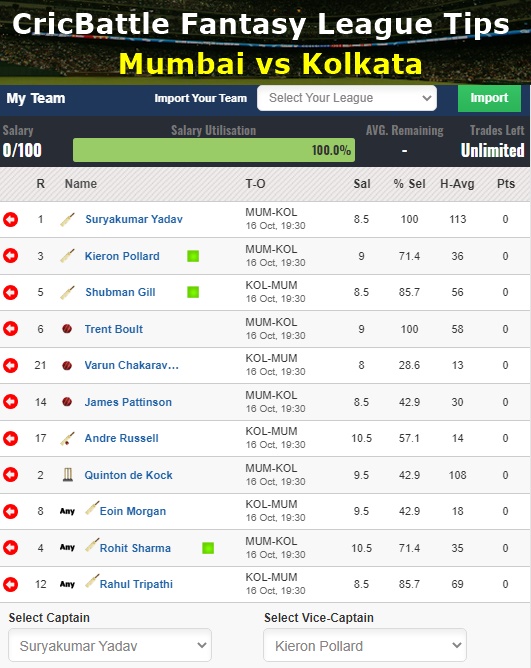 Mumbai vs Kolkata on October 16

Half of the season of the 13th edition of the IPL is over and now it is time for the repeat games as teams will take on each other for the second time in IPL 2020.  MI will be up against KKR on Friday at Abu Dhabi. The Mumbai Indians are in a great position as they have won five out of their seven games whereas the Kolkata Knight Riders have won four out of their first seven games. The last time these two teams met this season, MI completely outplayed KKR, and this time around, KKR will be looking to get some revenge against the Mumbai side. KKR doesn’t have a great record against MI but they will want to turn things around as two important points will be up for grabs at Abu Dhabi on Friday. MI are the better side on paper and they have a great record against KKR as well. There is a high chance that they will keep their winning momentum going in the tournament after beating KKR.

Best economical pick – Shubman Gill is in great form and has given a decent start to the team in all their wins. He has amassed 254 runs in seven matches at a strike rate of 119.42. Kolkata Knight Riders will expect him to remain consistent and bat for long in this match.

Top captains & vice captains – Suryakumar Yadav has the ability to build innings; therefore, he has been given the no.3 position in the playing XI. In the last two matches, after the early fall of the openers, he has stitched up partnerships to guide his team to victory. He has amassed 233 runs in six matches at a strike rate of 155.33. Kieron Pollard is one of the biggest pillars of Mumbai Indians. When he is on the song, it becomes hard to stop him if he survives till death overs. Pollard has scored 174 runs in seven matches at the terrific strike rate of 189.13 while he has also snared two wickets.

Smart pick – Eoin Morgan has a crucial role to play for Kolkata Knight Riders in the middle order. He has given decent performance, but that didn’t match with the standards he has set up in international cricket. Morgan needs to get more runs for KKR on the board to resolve their middle order.

Cautious Pick – Nitish Rana comes to the field like a storm but doesn’t stay longer. Being at no.3, the left-hand batsman needs to set up a solid partnership to leave Kolkata Knight Riders in a good position. He has amassed 120 runs in seven matches at the strike rate of 135.13.