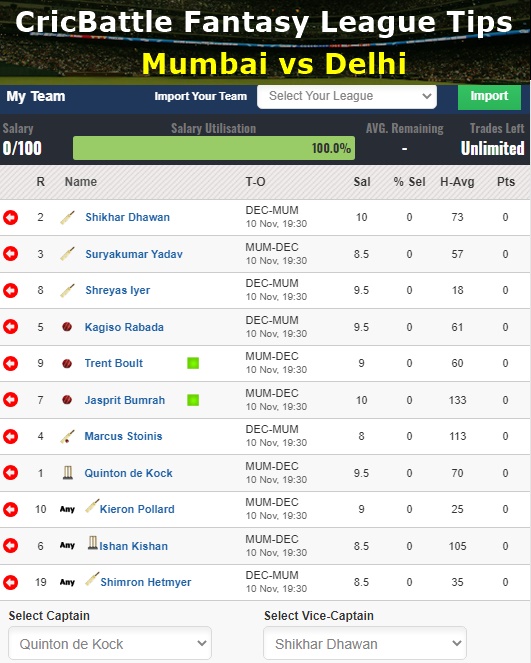 Mumbai vs Delhi on November 10

Mumbai Indians came into the 2020 Indian Premier League as the defending champions. And they have played like one thus far. After topping the points table in the league stage, Rohit Sharma and Co made the final, beating the Delhi Capitals in the Qualifier 1 at the Dubai International Cricket Stadium. On Tuesday, November 10, MI will again face the Capitals in Dubai. Having already beaten the Capitals three times in the ongoing edition, MI would be starting as the favorites. However, Shreyas Iyer’s DC will be high on confidence as they. The Capitals, in the Qualifier 2, got past the Sunrisers Hyderabad by 17 runs to make their maiden final of the IPL. Having already waited 13 years, they will be desperate to cross the final hurdle, defying the odds.

Best economical pick – Suryakumar Yadav has been one of the brightest spots in the current edition of IPL, having the penchant for consistent run-scoring and impactful knocks. In 15 games, Yadav has 461 runs with four half-centuries at a compelling average of 41.91 and a strike rate of 148.23. The 30-year old’s ability to soak in the pressure would be very critical in the big final.

Top captains & vice captains – Quinton de Kock has been the standout batsman for MI in the T20 tournament. The left-hander has scored 483 runs from 15 matches at an average and strike-rate of 37.15 and 139.59 respectively. The Mumbai-based team has been able to make use of the powerplay on the back of some stunning knocks from the southpaw. In the crunch game on Tuesday, MI will be hoping for him to fire again. Shikhar Dhawan is one of the contenders to get the Orange Cap after he scored a half-century against the Sunrisers on Sunday. The left-hander is only 68 runs away from toppling Kings XI Punjab’s KL Rahul, who’s sitting on the top with 670 runs. Dhawan started the tournament in a jittery manner but now has 603 runs from 16 matches at an average and strike-rate of 46.38 and 145.65.

Smart pick – After a disheartening show in qualifier 1 against MI, Kagiso Rabada was back at his absolute best. In the nervy 19th over, where the game could have gone anywhere, Rabada ensured that it went Delhi’s way. He picked 3 wickets in one over.  The pacer has got back the purple cap from Jasprit Bumrah.

Cautious Pick – Ravichandran Ashwin claimed Rohit Sharma’s wicket for a first-ball duck in the first qualifier in Dubai. Rohit Sharma has had an ordinary tournament so fair and would be keen to score big runs in the final to get in the form ahead of the Australia tour. In 11 matches, the 33-year old has only 264 runs at 24.00.

Testimonials
I have joined and playing cricbattle now nearly more than 2 years and it gives me immense pleasure to say that the format cricbattle team have designed is a true masterclass. I have also joined other sites, but it never gave me feel like this so I can say I am 99.9% active on cricbattle site. I spend my most of the time on cricbattle site and I must say that complete credit goes to cricbattle backend team and the designers/makers of this site. Thank you for all your efforts for complete satisfaction and entertainment.vaibhav09
https://loanexpert.net.ua/ Favorable online loans and credit cardsstvmonro
View all