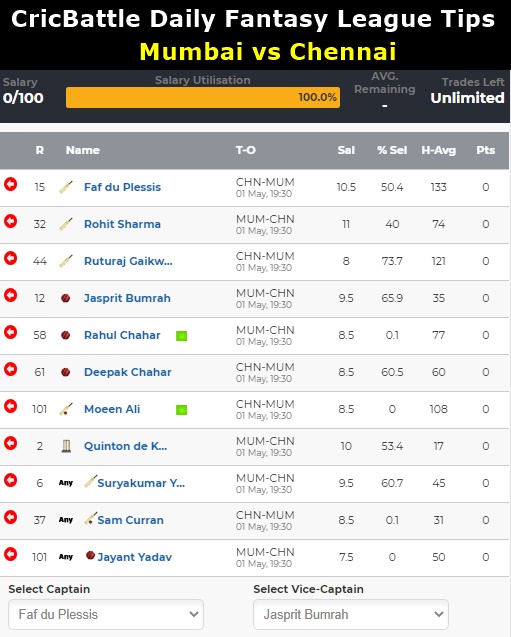 Mumbai vs Chennai on May 1

Unarguably the biggest rivalry in the history of the IPL: the Chennai Super Kings versus the Mumbai Indians. A contest as mouth-watering as any ever gets. To take a cue from the recent happenings, Mumbai does not look at their challenging best to stop the unstoppable Super Kings, who have ticked all the boxes and have put up a clinical display, winning five on the bounce. Meanwhile, concerns have been in plenty for the Mumbai Indians, who are fresh after snapping a two-match streak of losses courtesy of their 7 wicket win over RR. After ending the first leg of the tournament with more losses than wins, they must be pleased by the effort Quinton de Kock, Krunal Pandya, and bowlers put in to take them home and give a winning start to the Delhi leg. Mumbai has struggled in the powerplays with their opening partnerships not laying any solid platform. They have been forced to drop a middle-order mainstay Ishan Kishan after five failed outings, and even as Krunal Pandya played a handy knock against Royals, the team is yet to generate any result even close to what is expected from a middle-order of that kind. Against the Royals was the first instance in IPL 2021 that Mumbai batted second and the first time when they crossed 160. Doing that meant their death-over batting remained untested at the venue after they struggled horrendously in Chennai in that phase despite names like Hardik Pandya and Kieron Pollard in the lineup. Their arch-rivals have been at their dominating best, dishing out one brilliant performance after another and ruling the roost in the points table. The question was never on their merit or ability, but on how much would an aging side manage to compete in a tournament as cruelly competitive. CSK has shown that they might be old, but far from over. Their newest purchase, Moeen Ali, has been a revelation, contributing both with the bat and the ball. Openers Ruturaj Gaikwad and Faf du Plessis have given flying starts: 115, 74, 129 being the last three. Suresh Raina and Ambati Rayudu have solidified the middle-order, and Ravindra Jadeja has shown that he can win matches all by himself, let alone 10 members alongside. The Super Kings have bagged 14 powerplay wickets, the most this season and nearly five times as Mumbai (3). In short, there is no area where they have failed to impress, including MI’s bugbear in 2021 – death over batting. This has been the weakest Mumbai Indians have ever looked but despite that, an odd performance from Rohit Sharma, consistent ones from Rahul Chahar, Jasprit Bumrah, and Trent Boult, and one from de Kock and Pandya recently has been for the taking. Despite being far from their best, they find themselves fourth on the table. Regardless of where they are, they can never be written off.

Best economical pick – Moeen Ali has been in solid touch this season and has been a revelation at No. 3 for CSK. He has got a brisk start almost every game and he is striking at 155.78 in this IPL 2021. He has scores of 36, 46, 26, 25 and 15 in the five games that he has played so far. Moreover, he has been bowling well too and has returned with four wickets at an economy rate of 6.63. The off-spinning all-rounder has bowled just 11 overs in five games but with a few left-handers in the MI top-order, he should fancy his chances.

Top captains & vice captains – Faf du Plessis has been outstanding in the ongoing edition of the T20 tournament. In six games, the right-hander has hammered 270 runs at an average and strike-rate of 67.50 and 140.62 respectively. He also has three fifties to show for his efforts with a top score of an unbeaten 95. Though against the Mumbai-based team, he averages a mere 22.85, Du Plessis has every chance of making amends. Jasprit Bumrah has picked up only five wickets in the six games he has played thus far. Though he hasn’t gotten a lot of wickets, he has made sure of keeping the batters in check with accurate bowling. In 23 overs, the pacer has maintained an economy rate of 5.91. Against the Super Kings, the fast bowler has picked up eight wickets from 38.4 overs at a decent economy rate of 7.37.

Smart pick – Rohit Sharma might not have got a big score in the last but he has been batting really well. He is at the top of the run charts for MI this season. He has got just fifty but he has constantly got solid starts. The MI skipper has amassed 215 runs at an average of 35.83. Thus, he has threatened to get a big score in almost every game. Moreover, Rohit has a good record against CSK while playing. Rohit has scored 626 runs which includes seven half-centuries against MS Dhoni and co.

Cautious Pick – Nathan Coulter-Nile played his first game of the ongoing edition against RR and had to return without a wicket. In four overs, he gave away 35 runs at an economy rate of 8.75.