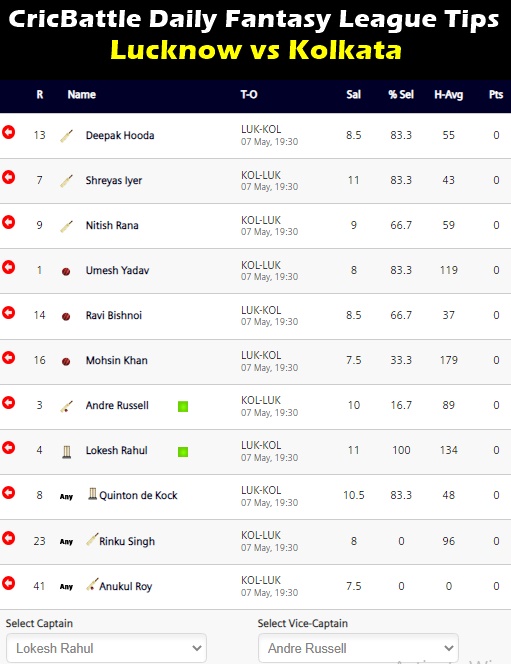 Lucknow vs Kolkata on May 7

The Lucknow Super Giants will be locking horns with the Kolkata Knight Riders in Match 53 of IPL 2022 at the Maharashtra Cricket Association Stadium in Pune on May 7. Both teams will be heading into this clash having won their respective encounters. While Lucknow beat the Delhi Capitals by six runs, Kolkata got the better of in-form Rajasthan Royals by seven wickets. LSG have been one of the most consistent sides in this tournament and have won seven of their 10 matches and have 14 points to their tally with a superior NNR of +0.397. They have been on a roll so far and would be hoping to inch a step closer to a playoff berth. KKR on the other hand might have beaten RR but, that victory came after five consecutive losses and now with time running out, they would need to showcase perfection in all their remaining fixtures in order to keep their qualification hopes alive.

Best economical pick – Umesh Yadav has been KKR’s standout bowler so far. He has been their go-to man with the ball in hand right from the curtain-raiser against the defending champions CSK. The senior pacer might have gone wicketless on a couple of occasions but, that has not prevented him from featuring in the Orange Cap list having registered 15 scalps to his name. The Vidarbha speedster would be eager to add more to his wickets column.

Top captains & vice captains – KL Rahul has enjoyed an excellent run with the bat so far this season. He has already registered two centuries against the Mumbai Indians and comes into this contest after having scored a 51-ball 77 against the Delhi Capitals. Rahul has already amassed 451 runs from 10 outings including two unbeaten knocks averaging 56.38 and a strike rate of 145.02. He would be hoping to maintain his consistent run when he takes on the Kolkata bowling line-up. Andre Russell didn’t get a chance with either the bat or ball in the last game. Russell is an important part of KKR’s lineup and might show his class in this game. He has made 227 runs in 10 matches at an average of 37.83 and has picked 10 wickets too.

Smart pick – Deepak Hooda made a half-century in the last game and added 95 runs for the second wicket along with Lokesh Rahul. He has scored over 30 runs in the last 2 games and might have returned to the form that he showed during the first few matches. Hooda is likely to solve the middle-order crisis for LSG in this match.

Cautious Pick – Baba Indrajith has been able to score only 21 runs in 2 matches for KKR and is one player whom you can avoid in your fantasy team for this match.