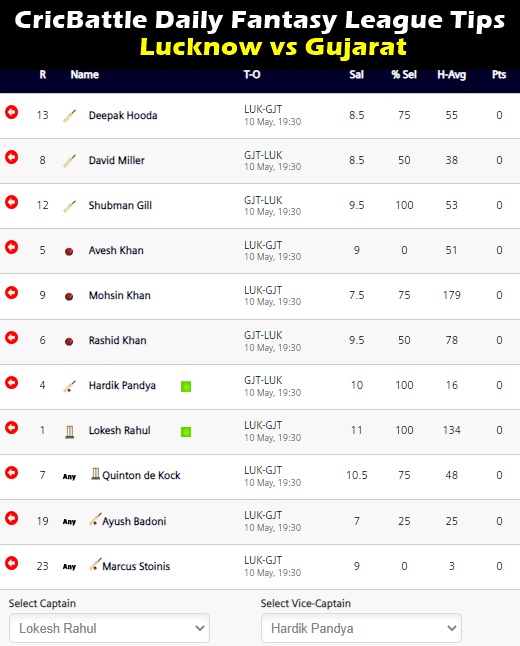 Lucknow vs Gujarat on May 10

Lucknow Super Giants will be next up against the Gujarat Titans in Match 57 of IPL 2022 at the MCA Stadium in Pune. This will be a mouth-watering contest between the top two teams in the tournament this season. Gujarat Titans had a fantastic run until the last two games when they ended up on the losing side. Lucknow Super Giants, on the other hand, have been splendid throughout the tournament and they are coming off four victories in their last four games. The KL Rahul-led side has excelled in all three departments and each of the personnel in the squad has been putting up their hands. They are likely to go in with the same playing XI after a dominating victory in the last game.

Best economical pick– Deepak Hooda has become the key player for LSG in the middle order. He has made 30+ scores in the last 3 matches including a half-century against Delhi Capitals. He would again be looking to play a key role for the team in this match.

Top captains & vice captains – KL Rahul has been the standout batter for the Lucknow Super Giants this season and has already accumulated 451 runs in 11 games. However, he was dismissed for a diamond duck in the previous game through a run-out, and he will be looking to make up for it with a big score. The right-hander has been in excellent touch and has the ability to lead the side from the front. In 10 matches, Hardik Pandya has made 333 runs at an average of 41.62 and a strike rate of 134.27 including 3 half-centuries. He has not been able to make a decent score in the last 4 matches and would be expected to play a key role for GT in this game.

Smart pick – Avesh Khan has been out of the side for a couple of games this season, but has managed to keep his form going and was the pick of the bowlers in the last game. The right-arm quick has picked up 14 wickets in nine games this season and finished with figures of 3 for 19 against KKR. He will be looking to continue his good performances in the upcoming fixture as well.

Cautious Pick – Ravi Bishnoi has not been able to pick more than 1 wicket in the last 7 matches for LSG. You can avoid him in your fantasy team for this match.