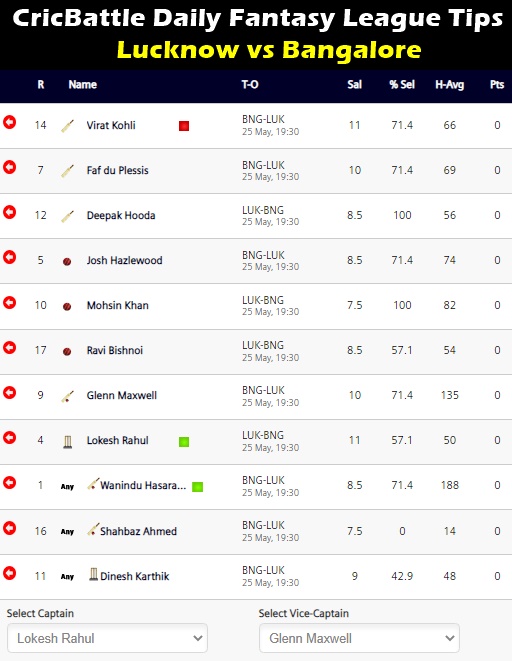 Lucknow vs Bangalore on May 25

Lucknow Supergiants are all set to take on the Royal Challengers Bangalore in the eliminator of IPL 2022 at the Eden Gardens in Kolkata. The KL Rahul side finished third in the points table and they are coming on the back of a nail-biting thriller against Kolkata Knight Riders in the previous game. The side is likely to bring back regulars like Krunal Pandya and Ayush Badoni for the upcoming fixture after being benched for their last league game. On the other, Royal Challengers Bangalore finished off their league stage campaign in fourth place with a victory over the Gujarat Titans and also were helped out by Mumbai Indians to make it to the top four. The Faf du Plessis-led side was impressive in both the departments and the franchise will be immensely relieved with their talisman Virat Kohli returning to form. Mohammad Siraj might be brought back into the playing XI at the expense of Siddharth Kaul.

Best economical pick – Josh Hazlewood made a good return in the previous game after going for plenty in the game against Punjab Kings and finished with two wickets The Australian has proved to be an excellent pick by the RCB so far and his economy rate has been phenomenal as well. With his ability to win games on his own, Hazlewood will be a potent option for skipper Faf du Plessis at the death overs and in the powerplay.

Smart pick – Virat Kohli finally managed to get his form back after a stupendous inning in a high-pressure game against the Gujarat Titans and played a match-winning knock for his franchise. The right-hander adjusted his technique slightly which helped him massively and ended up with a 73-run knock at the top of the order. He will be looking to continue his good form and step up yet again in an important fixture.

Cautious Pick – Mahipal Lomror has played a couple of good knocks lower down the order but does not face enough balls to give consistent fantasy returns. In 5 matches so far he has scored 64 runs at an average of 21. He will be batting very low and the fact that RCB has a good top order it is tough to expect him to have a big impact on this match. So ignore him for this match.