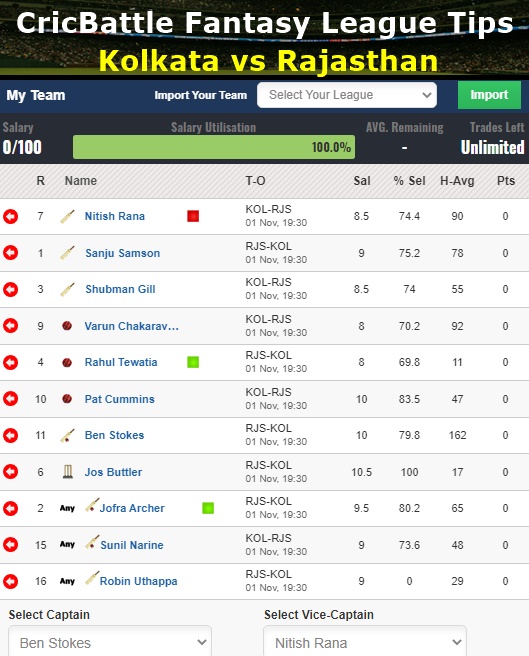 Kolkata vs Rajasthan on November 1

This is a virtual shoot-out game. Kolkata Knight Riders and Rajasthan Royals will face-off against each other to stay alive in the IPL 2020 on Sunday. Moreover, they will also get an idea by then about the net run-rate scenario with CSK facing the KXIP earlier in the day. Also, CSK winning that game will make life very easy for KKR and RR both. Talking about the recent form, the Royals are coming off two stunning wins over MI and KXIP chasing down 195 and 185 in back to back matches. Ben Stokes has struck form at the right time for them. Even the rest of the team is clicking together now. KKR, on the other hand, lost to CSK in the last-over thriller to make things tough for themselves and Eoin Morgan and his men will be looking to put their best foot forward.

Best economical pick – Varun Chakravarthy continued with his impressive run in the ongoing IPL with yet another brilliant performance against Chennai Super Kings. The leg-spinner dismissed Shane Watson before dislodging MS Dhoni for the second time this season and eventually finished with figures of 2-20 in 4 overs.

Top captains & vice captains – Ben Stokes has received the man of the match award in the last two wins that Rajasthan Royals have enjoyed. Ben Stokes clattered a hundred against Mumbai Indians followed by a half-century against Kings XI Punjab, setting the tone for their victory. Against KXIP, Stokes also took a couple of wickets and an outstanding catch to dismiss Mandeep Singh. Nitish Rana started off cautiously against CSK as he stitched KKR’s slowest fifty. But the southpaw switched gears brilliant during the middle-order. Rana took the attack to the spinners and smashed his last 37 runs in a mere 17 balls before eventually getting dismissed for a 61-ball 87. KKR will hope that the southpaw continues with his form in the virtual knockout against RR.

Smart pick – Sanju Samson has returned to form, having played vital roles in the last two victories for the Rajasthan Royals. Samson scored 48 off 25 deliveries against Kings XI Punjab as an unfortunate run-out dented his chances of getting to a fifty. The right-handed batsman’s run-tally has risen to 374 in 12 IPL 2020 games.

Cautious Pick – After having put up brilliant performances in IPL 2020, Lockie Ferguson had a rare bad outing in the last game against CSK. Ferguson was taken to the cleaners by a rampaging Ruturaj Gaikwad in his 1st three overs. Ferguson finished with figures of 0-54 in his four overs

Testimonials
I was a regular player. But Tamil Nadu Govt have banned online games.Whether this comes under online games Or not. Please clarify.Shankar Raman
Happy with the app and it's truly one of the best sports fantasy app but recently it's taking a long time for withdrawals, I last applied for a 2k withdrawl and it's almost been 3 weeks and it's processing.Armaan
View all