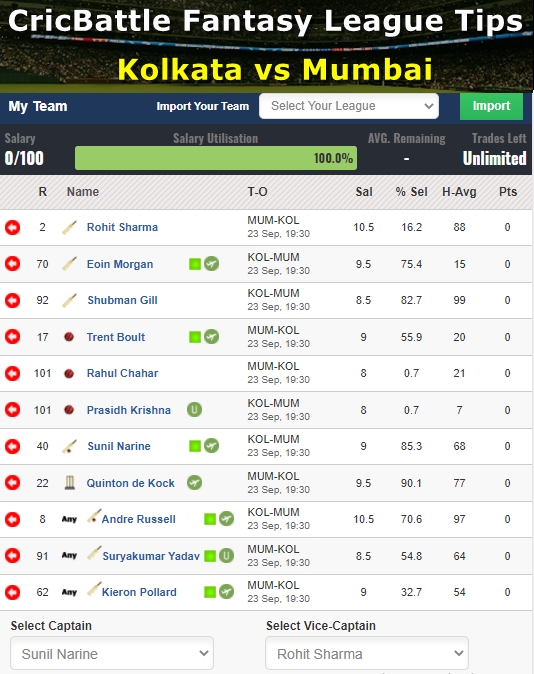 Kolkata vs Mumbai on September 23

Mumbai Indians didn’t make the greatest of starts in the 2020 Indian Premier League. Rohit Sharma and Co went down to the Chennai Super Kings by five wickets. Despite having the Yellow Army by the scruff of their necks, MI faltered at the finishing line. Their next match is against the Kolkata Knight Riders on Wednesday, at the Sheikh Zayed Stadium in Abu Dhabi. Records suggest that MI have dominated the Men in Gold and Purple. However, KKR can take heart from the fact that back in 2014, they beat the Mumbai-based franchise by 41 runs at the same venue. MI have generally strained in UAE conditions and the Knights can fancy their chances against them. Even as MI will be looking to make amends, Dinesh Karthik and Co will want a winning start.

Best economical pick – Shubman Gill has been threatening to break into the Indian side for quite some time now, and he could certainly do so with his performances this year. Gill will have a lot of responsibility on his young shoulders, and the calm head that he possesses will go a long way in justifying his captain's faith in him.

Top captains & vice captains – Sunil Narine has tasted decent success against MI with the ball in hand. In 16 matches, he has 21 wickets at an incredible economy of 6.87. In fact, the only time KKR and MI met at Abu Dhabi, Narine ended with a four-wicket haul. However, averaging 5.33 with the bat, Narine will be looking for some runs against Rohit’s men. His role is expected to be a critical one even in the next match. Rohit Sharma’s numbers suggest that he’s pretty much fond of the Knight Riders’ bowling attack. In 25 matches against them, the 33-year-old has 824 runs at an average and strike-rate of 45.78 and 133.77 respectively. He also has a top score of an unbeaten 109 against them to go with five half-centuries. KKR can’t afford to let Rohit get his eye in as he could again turn up with a massive score.

Smart pick – Eoin Morgan has not had much to do in the IPL over the years. However, that is IPL’s loss more than it is Morgan’s. He is one of the most innovative cricketers in the T20 format and possesses the ability to hit good balls out of the park. A strike rate of 91.47 in ODIs and 138.95 in T20Is is ample proof of how quickly he can score. Morgan will look to improve his mediocre IPL record -- 854 runs from 52 matches.

Cautious Pick – Jos Buttler going to miss this match, as he is currently undergoing mandatory quarantine after arriving in the UAE along with his family. His quarantine period differs from other English and Australian players, as they had arrived straight from the bio-bubble for their limited-overs series in the UK to the IPL's bio-bubble.