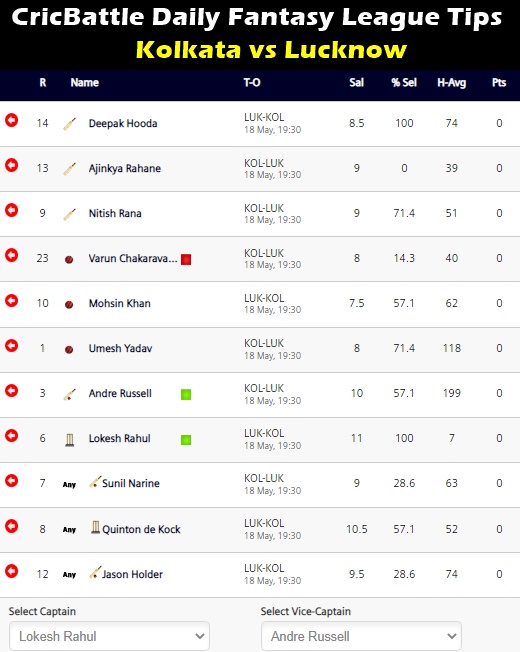 Kolkata vs Lucknow on May 18

The two-time champions Kolkata Knight Riders (KKR) will take on the new entrants Lucknow Super Giants (LSG) in a group stage match of the Indian Premier League 2022 to be played at the Dr. DY Patil Sports Academy, Mumbai on May 18 (Wednesday). While the Men in Purple won their previous contest against the Sunrisers Hyderabad (SRH), the new entrants lost their previous match against the Rajasthan Royals (RR). Speaking about their standings in the points table, LSG is currently placed third in the points table with eight wins in 13 matches. Meanwhile, KKR has had a hot and cold tournament so far and they are placed in the sixth spot in the points table with six victories in 13 matches.

Best economical pick – KKR ace spinner Varun Chakravarthy bowled impressively in the last encounter against SRH. Even though he scalped only one wicket, he created a few chances in his bowling. As the wickets are getting slow, Varun’s variations can come in very handy and he can be the bowler to watch out for in the next game.

Top captains & vice captains – Despite failing to get going in the previous encounter, LSG skipper KL Rahul is the second-highest run-getter in IPL 2022. The right-handed batter has stroked 469 runs in just 13 matches and at an excellent average of 42.64. Rahul will want to make a strong comeback in the next match and win the game for his team. Andre Russell has maintained the reputation of being the best all-rounder for KKR. Russell has made 330 runs in 13 matches at an average of 41.25 and a strike rate of 182.32. He has also taken 17 wickets at an average of 13.7, an economy of 9.25, and a strike rate of 8.8.

Smart pick – Deepak Hooda is the second-highest run-scorer for LSG this season. Hooda has made 406 runs in 13 matches at an average of 31.23 and a strike rate of 133.55 including 4 half-centuries. In the last game against Rajasthan Royals, Hooda scored 59 runs off 39 deliveries and was the highest scorer for the team.

Cautious Pick – Baba Indrajith might get another chance to open the innings for KKR in place of Ajinkya Rahane. However, you can avoid him in your fantasy team as he has not been able to deliver decent performance for the team.