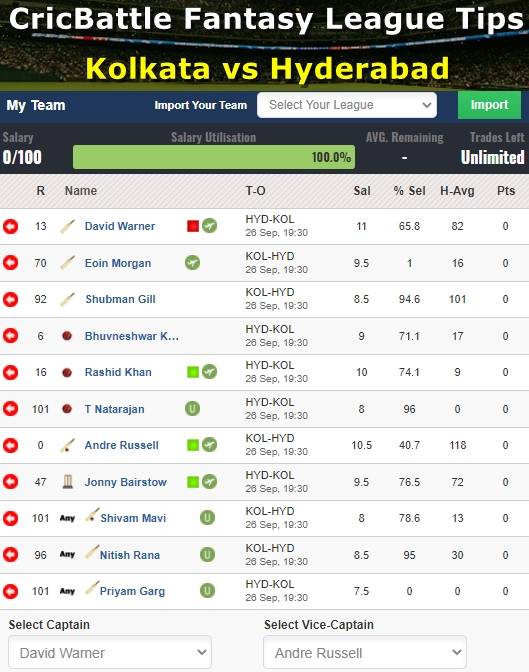 Kolkata vs Hyderabad on September 26

Kolkata Knight Riders and Sunrisers Hyderabad are the only teams, who are yet to register a victory in the 2020 Indian Premier League. The Knights started their campaign with a 49-run defeat at the hands of the Mumbai Indians at the Sheikh Zayed Stadium. Their next match is against David Warner’s Sunrisers on Saturday, September 26 in Abu Dhabi itself. The Sunrisers, on the other hand, could have had a winning start against the Royal Challengers Bangalore. But luck eluded them as they underwent a serious batting collage. Also, injuries to Kane Williamson and Mitchell Marsh have kept them on their toes. Both teams had their travails in their respective opening matches and they would desperate to find some much-needed rhythm.

Best economical pick – Rising fast bowler Shivam Mavi bowled exceptionally well in the death overs for KKR in the previous match. He will again spearhead the pace attack for the franchise and will look to make the most of his abilities.

Top captains & vice captains – David Warner has taken a liking to the KKR bowling attack over the last few years. In 21 matches against them, the southpaw has a stunning 829 runs at an average and strike-rate of 43.63 and 147.77 respectively. He also has a couple of centuries and four half-centuries to go with a top score of 126. Swashbuckling West Indies all-rounder Andre Russell has been a key member of the KKR side. He can change a game on his own if he gets going. Russell is the most valuable player of the KKR side but failed to make it count in the previous match. He will be expected to come up with a better show against SRH.

Smart pick – Jonny Bairstow was the top run-scorer for Hyderabad in their first game with 61 off 43 deliveries, laced with six fours and two sixes. The Yorkshire keeper-batsman added 71 with Manish Pandey following the departure of Manish Pandey. He lost his wicket to Yuzvendra Chahal following a wide slog in the 15th over when SunRisers needed only 43 for victory. The match turned on its head as Bairstow perished. Hence, the 29-year old should concentrate on putting up impactful performances that result in a win.

Cautious Pick – Kuldeep Yadav’s IPL numbers from 2018 onwards aren’t all that great. In the opening game against Mumbai Indians where the pitch favoured the batsman, Kuldeep Yadav failed to make the most of his capabilities.