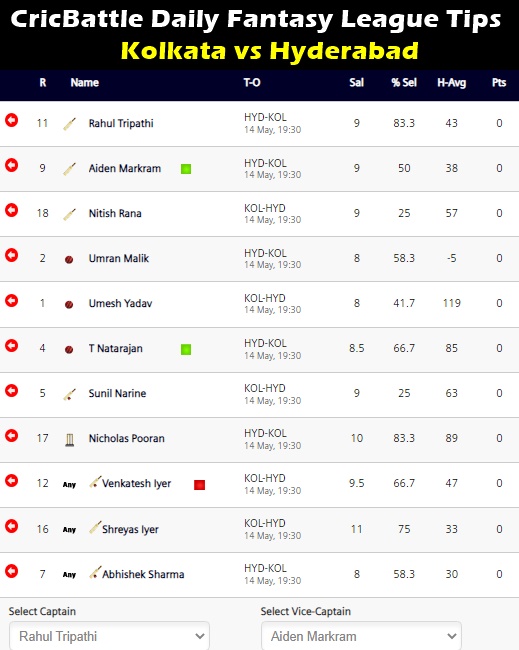 Kolkata vs Hyderabad on May 14

Kolkata Knight Riders will take on the Sunrisers Hyderabad in their next encounter at the MCA Stadium in Pune. After a good start to the season, KKR faded off in the middle of the tournament and their campaign looked in all sorts of trouble. However, they managed to get their combination right in the last game finally, and are likely to stick with this playing XI for the last two games unless Umesh Yadav returns. However, their pace bowler Pat Cummins has been ruled out and returned home as well. On the other hand, the Sunrisers Hyderabad has lost all their last four games and they are desperate for a win in the upcoming fixture. The injury to T Natarajan and Washington Sundar hasn’t helped their cause and they will be looking to get back to winning ways soon with the playoff stages approaching. With five wins in 11 games, SRH is at the sixth position in the points table and they will need to improve their net run rate as well.

Best economical pick – Venkatesh Iyer finally, was back in form for the Kolkata Knight Riders at the top of the order and he set the tone for a good score to be posted on the board. The left-hander who had been out of the side in the last few games due to poor form was given another go and was immediately impressive with a 24-ball 43. He has certainly made a statement with the range of shots he played and looked in really good touch as well.

Top captains & vice captains – Rahul Tripathi smashed 71 runs in the last head-to-head game against Kolkata Knight Riders and will be aiming for another healthy contribution in this game. He can surely be captain of your fantasy team. Aiden Markram smacked 68 runs in the last head-to-head match against Kolkata Knight Riders and can turn out to be effective with the bat in this game as well.

Smart pick – Sunil Narine wasn’t among the wickets column for the KKR in the previous game, but he certainly bowled an amazing spell to keep the runs tight and finished with 0 for 21 in his 4 overs. The mystery spinner has got the ability to run through sides on his day and the return of Varun Chakravarthy has added to his liking as well.

Cautious Pick – In what can be called a major blow for Kolkata Knight Riders, Pat Cummins has been ruled out of the ongoing IPL due to a hip injury. As a result, the Australian Test captain has left the team’s bio-bubble to head towards Sydney.