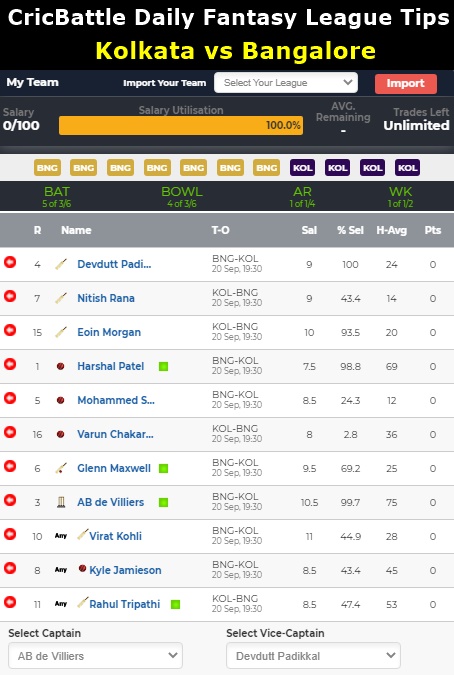 Kolkata vs Bangalore on September 20

Kolkata Knight Riders and Royal Challengers Bangalore will face each other in the 31st match of the IPL 2021. Sheikh Zayed Cricket Stadium in Abu Dhabi will host the contest between the sides. Kolkata Knight Riders would not have enjoyed the first leg of the IPL, as they won only 2 of their 7 games. They bank on youngsters at the top of the order, as well as in the bowling department. Royal Challengers Bangalore has got the perfect opportunity to lift the IPL trophy this year. The bunch of foreign players they possess will hand them a big advantage in the UAE leg. Wanindu Hasaranga, who is likely to make debut his IPL debut in this match, has been in excellent form for Sri Lanka. They are currently placed at the third spot in the standings with 10 points.

Best economical pick – Even though Harshal Patel has an economy of 9.17 in this IPL, it is his wicket-taking knack that makes him the real deal. He is the leading wicket-taker so far, having picked up 17 wickets, with the best figures of 5/27.

Top captains & vice captains – Whatever the condition and situation may be, AB de Villiers on any day is the savior number 1 for RCB. He has won plenty of matches single-handedly for his team. In 6 innings in this year’s IPL, de Villiers has scored 207 runs at an average of 51.75 and an excellent strike rate of 164.28. Devdutt Padikkal is the next big thing in Indian cricket. He will be acclimatized to UAE conditions, since he made his IPL debut last year in this country. The 21-year-old southpaw has mustered 195 runs in 6 matches in this IPL at an average of 39, which includes a knock of unbeaten 101, which came against Rajasthan Royals.

Smart pick – Nitish Rana had a great start to his campaign in the first leg of the IPL. The Delhi-born left-handed batsman has scored 201 runs in 7 matches at an average of 28.71, which comprises of 2 half-centuries.

Cautious Pick – Shubman Gill has managed to score 132 runs in 7 matches in this year’s IPL. The KKR opener has maintained an average of 18.85. You can take a risk and pick him in your fantasy team.