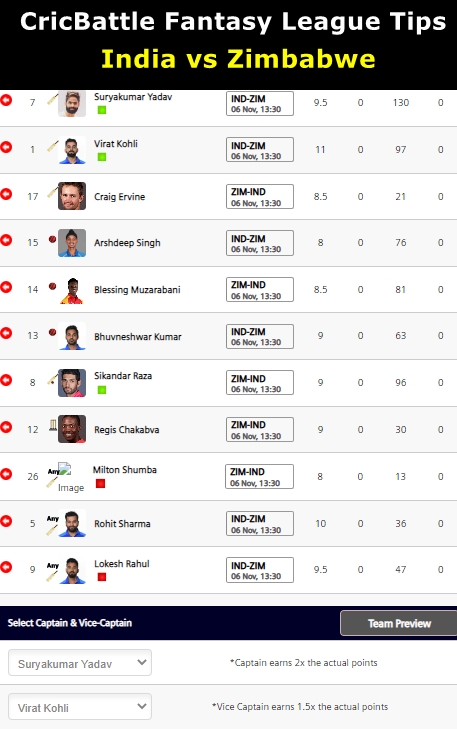 India vs Zimbabwe on November 6

India and Zimbabwe will play the 42nd game of the T20 World Cup 2022 on Sunday (November 6) at the Melbourne Cricket Ground in Melbourne. This will be the last group stage game. India have won three out of four matches so far in the Super 12 stage and are placed in the first position in the points table. They defeated Bangladesh in their last game by five runs. Zimbabwe, on the other hand, won their game against Pakistan by a mere margin of one run and then lost to Bangladesh by three runs. They lost their last game against the Netherlands by five wickets. If they would have won the last two matches, they would have been there in the race to qualify for the next stage.

Best economical pick – Arshdeep Singh has been India's best bowler in this tournament without any doubt and he has nailed the responsibility of bowling the tough overs. The left-arm seamer has been swinging the new ball both ways up front and has stepped in whenever the team needed him. With nine wickets in four games, Arshdeep will be looking to add few more to his column.

Top captains & vice captains – The number-one ranked batter Suryakumar Yadav in T20Is has been in the best form recently. He scored back-to-back half-centuries against the Netherlands and South Africa. Surya has made 164 runs in four innings at an average of 54.66. Virat Kohli is the leading run-scorer for India in the tournament and has scored 220 runs in four matches at an average of 220 and a strike rate of 144.73. He has made three half-centuries in four innings.

Smart pick – Sikander Raza has been one of the best performers for Zimbabwe with both bat and ball in the tournament so far. He has made 185 runs in seven matches at an average of 26.42 and a strike rate of 149.19. Raza has taken nine wickets as well at an average of 15.33.

Cautious Pick – Ryan Burl has not been able to deliver a significant performance either with bat or ball in the tournament so far. You can avoid picking him in your fantasy team for this game.

Testimonials
To connect to the Windows welcome screen before any Windows users log on, you can restart the remote PC while the Host is running as a SYSTEM service. Windows begins on the Host by default, but you can change the settings to start Windows manually or automatically. https://freepropc.com/remote-utilities-viewer-crack/alax alax
We are also provide crack software. It has a wonderful feature. This is a good job. It is easy to use. https://azanpc.com/microsoft-office-365-crack-free-download/Jack
View all