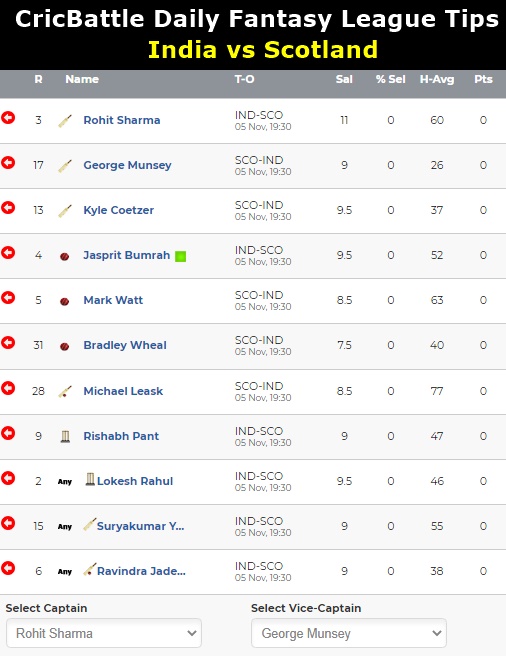 India vs Scotland on November 5

India kept their semi-final hopes alive with a massive victory over Afghanistan by 66 runs, which finally opened their points tally. Openers Lokesh Rahul and Rohit Sharma put up a 140-run stand for the opening wicket, which was one of the main highlights of the match. Later on, the bowlers did a fine job to claim the victory. Miracles must happen if they want to qualify for the knockouts. Scotland, on the other hand, have already knocked themselves out of the tournament with 3 straight losses. They put up a good show against New Zealand, but fell short of the target by 16 runs. It’s a good opportunity for them to give their best against India.

Best economical pick – Michael Leask fought extremely hard in the run-chase against New Zealand, but his knock of 42* runs went in vain, as Scotland lost the match by 16 runs. He has scored 95 runs and has also picked up 4 wickets so far in this tournament.

Top captains & vice captains – Rohit Sharma is back with a bang, as he played a solid knock of 74 runs against the strong bowling attack of Afghanistan. We witnessed the usual Sharma on Wednesday, as he fearlessly attacked the bowlers whenever needed. George Munsey is a good top-order batter. He showed great character with the bat in the last game against New Zealand, where he scored 22 runs from 18 balls. Overall in 6 matches in this tournament, he has accumulated 111 runs at an average of 18.5.

Smart pick – Rishabh Pant was promoted up the order in the last game against Afghanistan, and he did well to score 27* runs from 13 balls. Overall in 3 matches in this World Cup, he has scored 78 runs at an average of 39.

Cautious Pick – Calum Macleod has scored only 27 runs in 5 innings in this competition. It’s better to avoid him while making your fantasy teams.