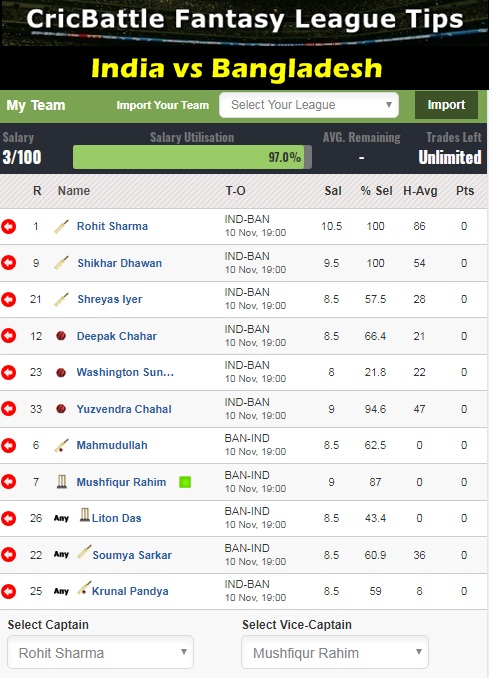 India vs Bangladesh on November 10

After having suffered a rare seven-wicket defeat in the opening fixture in Delhi, normal services once again resumed as Rohit Sharma’s masterclass at Rajkot, helped the Men in Blue to seek parity and set-up a decider at the Vidarbha Cricket Association in Nagpur. India may have won the second T20I but it did nothing to resolve their long-standing issues in the shortest format of the game. That they decided to chase in the second game paved way for their perennial weakness to be subsided. It has become apparently clear that the Men in Blue love chasing. And, there is a reason for it. India’s template at the top of the innings in the recent past has been to reserve wickets before going all-out for the target. While that might work during the run-chase, it has seldom worked when they are setting-up a total. Rohit Sharma knows it. He knows his numbers, his sides’ record while batting first. And it will be interesting to see whether he opts to bat first if they win the toss or India will go for a safer option, considering the series is on the line, as they did in Rajkot. As for the Asian Tigers, they would feel that they missed out on a golden opportunity in the last game after their openers had provided them with a blistering start. The visitors’ woes against quality wrist-spin were exposed to the hilt once again while their bowling- especially fast bowling- was atrocious, to say the least.

Best economical pick – Bangladesh has struggled against the leg-spin of Yuzvendra Chahal in both games. He is a must-have in the side.

Top captains & vice captains – Rohit Sharma smashed the ball to all the corners, displaying his elegant batting and making up for his failure in the previous T20I. The highlight of his innings was the 10th over of India's innings when he smashed Hossain with three consecutive sixes, scoring 21 runs off that over. It took only 23 balls for Rohit Sharma to register his 18th T20I fifty and he looked to be comfortably cruising towards his fifth T20I hundred. Mushfiqur Rahim is ideal choice for vice captain. Rahim is in decent form in the middle order with 64 runs in two games.

Smart pick – Shikhar Dhawan has gotten off to starts this series without being able to convert them into fifties. He should be backed to get some runs on Sunday.

Cautions Pick – Whether it is his stroke selection or his untidy wicket-keeping skills, Rishabh Pant is under considerable pressure and with Samson in the squad, this could be a crucial game for the southpaw. He made a grave mistake in the Rajkot T20I which could’ve cost India the game and the series.