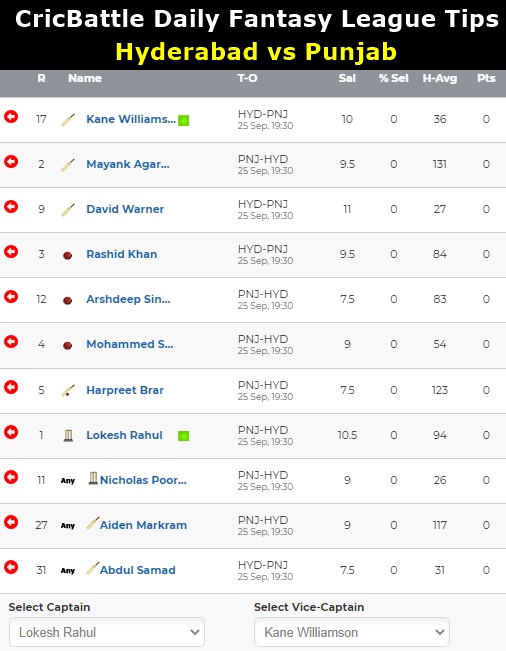 Hyderabad vs Punjab on September 25

Sunrisers Hyderabad will take on Punjab Kings in the 37th match of the IPL 2021. Hyderabad’s lean patch continued in the second leg as well as they were thoroughly thrashed by Delhi Capitals by 8 wickets on Wednesday. The Men in Orange are now effectively out of the playoffs race, but mathematics is providing them with a slim hope. With a solitary win, they are still sitting at the bottom of the table with only 2 points in their bank. Punjab Kings, on the other hand, should blame themselves and only themselves for their loss against Rajasthan Royals, as they choked once again in the run-chase. It has now become a habit for them, and they need to address their middle-order batting issues soon, as they mainly rely on their openers Lokesh Rahul and Mayank Agarwal. It will be interesting who will come out on top between the bottom-placed sides.

Best economical pick – We saw a different version of Arshdeep Singh in the last match against Rajasthan Royals, where he picked up his maiden 5-wicket haul in the IPL. He has scalped the most wickets for Punjab Kings in this edition.

Top captains & vice captains – You simply can’t miss Lokesh Rahul while making your fantasy teams. The Punjab Kings skipper has mustered 380 runs in 8 matches so far in this IPL at an average of 63.33, which comprises of 4 half-centuries. A big knock is expected from the willow of Kane Williamson in this match against Punjab Kings. The Sunrisers skipper has managed to score 146 runs in 5 matches so far in this competition at an average of 73.

Smart pick – Rashid Khan will be the key for Sunrisers on this completely batting-friendly surface. It is not easy to pick him, irrespective of whichever ground he might be bowling. He is the leading wicket-taker for Sunrisers Hyderabad in this competition and has maintained an excellent economy of 6.18 also. He has 39 runs to his name with the bat as well.

Cautious Pick – Kedar Jadhav is nowhere the player he was a couple of years back. It is even more shocking to accept that because two years back he was in the Indian ODI squad. His T20 numbers were never anything to be proud about and it has always seemed that he lacks a third and a fourth gear as a batter. There seems no position at this moment that could suit his style of batting, as he isn’t really scoring any runs. It is better to leave him out of your fantasy team.