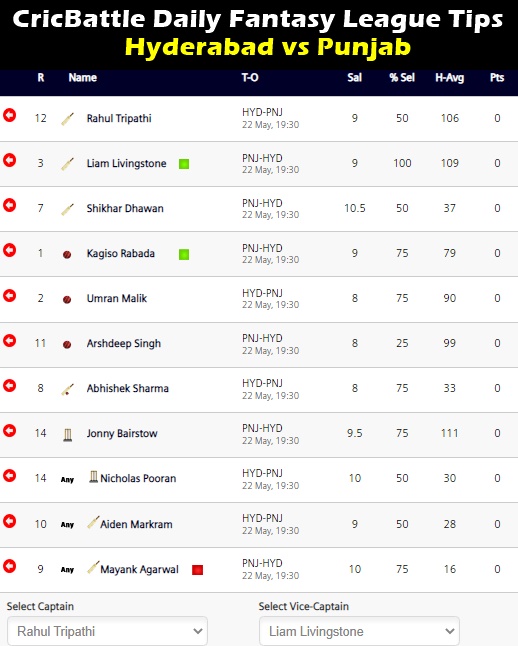 Hyderabad vs Punjab on May 22

Sunrisers Hyderabad is all set to take on the Punjab Kings in their next encounter at the Wankhede Stadium. Both teams are out of contention for the playoffs, however, they will be looking to sign off the season with a win. The Orange Army won a close game against Mumbai Indians but they will not have the services of skipper Kane Williamson who has returned to New Zealand for the birth of his child. Glenn Phillips is expected to replace him in the playing XI. On the other hand, Punjab Kings have had an on-and-off season and a win here might just push them to the sixth spot in the points table. Mayank Agarwal in particular has struggled for runs and dropping himself to the middle order hasn’t helped the cause as well. His captaincy has been impressive at times, but there is a case for his form as well. Shahrukh Khan might also get a look in for the final game in place of struggling Bhanuka Rajapaksa.

Best economical pick – Umran Malik bowled fantastically in a high-scoring game against the Mumbai Indians and finished with 3 for 23 in his three-over spell. The speedster looked in excellent rhythm with the ball and kept clocking up good speeds throughout the game. Malik has already picked up 21 wickets in the season and will be looking to add some more to his tally.

Top captains & vice captains – Rahul Tripathi played a superb knock of 76 off 44 balls in the previous game against Mumbai Indians and helped his side post a big total on the board. The right-hander has notched up 393 runs in 13 games this season and has been among the runs consistently as well. He will be looking to complete the season with a big knock which might also push his chances of making it to the Indian side. Liam Livingstone has played a key role for PBKS in the middle-order and has also taken a few wickets. In the last game against Delhi Capitals, Livingstone picked 3 wickets for 27 runs. With the bat, he has made 388 runs in 13 matches at an average of 32.33 and a strike rate of 177.98.

Smart pick – With 22 wickets in 12 matches, Kagiso Rabada is the leading wicket-taker for PBKS. Rabada has been in great form recently and has taken a four-wicket haul twice. PBKS would be hoping for some early breakthroughs from Rabada.

Cautious Pick – Washington Sundar has not been able to deliver a significant performance this season and has been in and out of the playing 11 due to injury. You can avoid him in your fantasy team for this match.