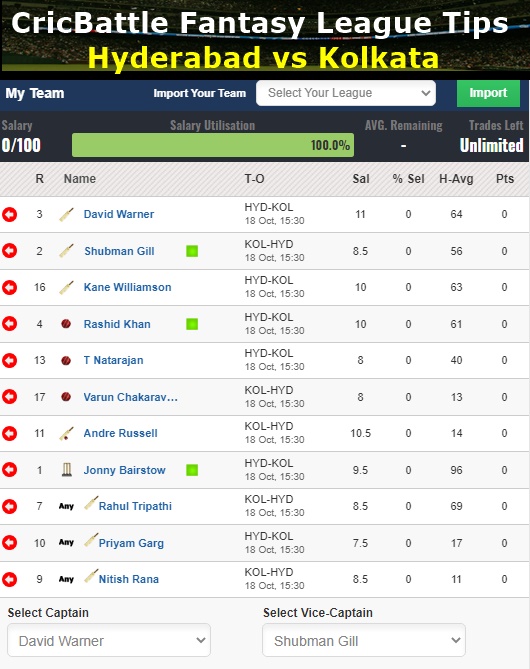 Hyderabad vs Kolkata on October 18

The Sunrisers Hyderabad are precariously placed in the middle of the points table. The team, captained by David Warner, has won only three out of their first eight games and need a string of wins to climb the latter. The Orange Army should be a tad low on confidence, especially after losing their last two games against the Rajasthan Royals and MS Dhoni’s Chennai Super Kings. The Sunrisers are next scheduled to lock horns with the Kolkata Knight Riders on Sunday, October 18 at the Sheikh Zayed Stadium in Abu Dhabi. In their previous meeting, SRH lost by seven wickets at the same venue and would be looking to make amends. The Knights won’t be high on confidence either after Mumbai Indians thrashed them by eight wickets in Abu Dhabi.

Best economical pick –Rahul Tripathi looked solid at the top of the order in his debut game as a opener. He was adjudged the man-of-the-match for playing the role of a sheet anchor. An added benefit with Tripathi is that he can bat lower down the order for the side as well which will come in handy for KKR. If he gets going with Shubman Gill, the duo can forge a big partnership for the side.

Top captains & vice captains – David Warner has 284 runs to show for his efforts, but he has been far from his very best. He has played an average of 35.50 and his strike-rate, which is currently at 121.88, isn’t on the higher side either. That he has a couple of half-centuries could give him a bit of confidence though. In his last meeting against the Knights, he got 36 runs and this time, he will be looking for something bigger. Shubman Gill has been a key performer for the Knights in the ongoing tournament. He has opened the batting for them and has scored runs consistently. Going into the next game, the youngster can take heart from the fact that he scored an unbeaten 70 against SRH the last time these two teams met in Abu Dhabi. His strike-rate, which is under the 120-mark is also a bit of a concern for KKR.

Smart pick – Kane Williamson has been doing well at No. 4. He registered a brilliant 50 in the last game. But SRH should look to send him in at three as he can have a much better impact on the game at that position.

Cautious Pick – Vijay Shankar played the last two matches for SunRisers Hyderabad in place of Abdul Samad; however, could not make a difference when there was a chance against CSK. Vijay Shankar managed only 12 runs off seven deliveries, perishing after a six that signaled a match-turning knock initially.