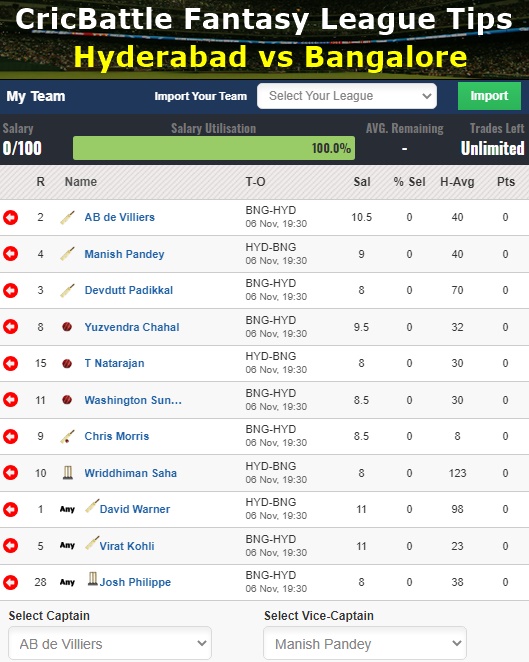 Hyderabad vs Bangalore on November 6

Sunrisers Hyderabad and Royal Challengers Bangalore have had pretty similar campaigns thus far in the 2020 edition of the Indian Premier League. Both teams won seven out of their 14 matches in the league stage and would now be locking horns in the Eliminator on Friday, November 6 at the Sheikh Zayed Stadium in Abu Dhabi. In the first round, both teams beat each other once. The Challengers would be a tad low on confidence after the Delhi Capitals beat them by six wickets. Virat Kohli and Co had a bit of a stutter in the second half of the first round. As far as the Sunrisers are concerned, they must be brimming with confidence after their 10-wicket victory over table-toppers Mumbai Indians. An absolute cracking encounter seems to be in the offing.

Best economical pick – Devdutt Padikkal in his maiden IPL season is RCB’s leading run-scorer by the end of the league stage. The left-hander has amassed 472 runs in 14 matches with 5 fifties. He is coming off a half-century against Delhi and will have the responsibility to give his team a strong start in an important game.

Top captains & vice captains – AB de Villiers is once again having an AB-esque season. His numbers in IPL 2020 are staggering. The magician has scored 398 runs at an average of 44 and a strike rate of 163 with 4 half-centuries. Time and again he has bailed Royal Challengers Bangalore out of a hole and put them in a winning position. The huge onus lay on the South-African in the clash against SRH. Manish Pandey has been in excellent form and is one of the reasons behind SRH’s decent show thus far in the tournament. In 13 innings, the right-handed batsman scored 380 runs at an average and strike-rate of 34.54 and 127.51 respectively. He has lent solidity to the Sunrisers’ middle-order. In SRH’s previous game against RCB, Pandey looked good and played his strokes fluently before getting out.

Smart pick – Yuzvendra Chahal is currently fourth in the list of Purple Cap holders with 20 wickets from 14 matches. In fact, the leg-spinner is thus far the most successful tweaker in the tournament. In RCB’s first game against SRH, he also turned out to be the Player of the Match, picking up three wickets. Even in their next outing, he didn’t flatter to deceive. Another decent spell would be expected of him.

Cautious Pick – Isuru Udana might face the axe if Navdeep Saini returns to fitness. However, he could also be benched if RCB decides to bring Moeen Ali in the eleven. Udana’s numbers this season are not at all confidence-boosting for the management. He has picked 8 wickets in 10 matches at an expensive economy of 9.72.

Testimonials
I have joined and playing cricbattle now nearly more than 2 years and it gives me immense pleasure to say that the format cricbattle team have designed is a true masterclass. I have also joined other sites, but it never gave me feel like this so I can say I am 99.9% active on cricbattle site. I spend my most of the time on cricbattle site and I must say that complete credit goes to cricbattle backend team and the designers/makers of this site. Thank you for all your efforts for complete satisfaction and entertainment.vaibhav09
https://loanexpert.net.ua/ Favorable online loans and credit cardsstvmonro
View all