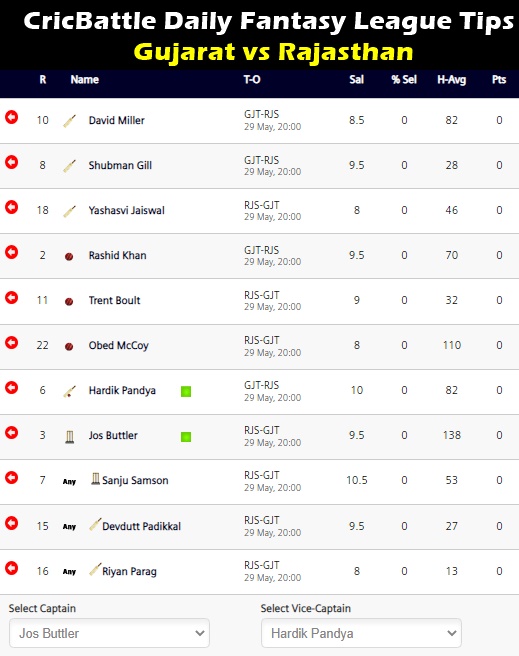 Gujarat vs Rajasthan on May 29

Gujarat Titans are scheduled to play the Rajasthan Royals in the all-important final of IPL 2022 at the Narendra Modi Stadium in Ahmedabad. The Hardik Pandya-led side will be confident after winning the Qualifier 1 against the same team and they topped the league stage as well. They are likely to stick to the same playing XI despite the bowlers going for a few in the previous game. On the other hand, the Rajasthan Royals dominated the Royal Challengers Bangalore completely in Qualifier 2 to make the final of IPL 2022. The Sanju Samson-led side has one of the best bowling lineups and the in-form batter Jos Buttler has played a substantial role for the RR in their batting lineup in the last two games. However, they will know that it will not be easy against Gujarat Titans who have found ways to win in difficult situations.

Best economical pick – David Miller won the Player of the Match award in the last game against RR as he scored 68 runs off 38 deliveries. This has been his best performance in IPL since his debut. He has made 449 runs in 15 matches at an average of 64.14.

Top captains & vice captains – In the last game, Jos Buttler made 106 runs off just 60 deliveries while chasing a target of 158 runs and single-handedly took RR over the line. He has made 824 runs in 16 matches at an average of 58.85 and a strike rate of 151.47. Hardik Pandya played another match-winning in the previous game alongside David Miller and he has stepped up on important occasions for the Gujarat Titans this season. The skipper has been in good touch in the last two innings and he has enjoyed his role at number four especially. With 453 runs in 14 games at an average of 45.30, Pandya will look to finish the tournament on a high.

Smart pick – Rashid Khan was the standout bowler for Gujarat Titans in the previous game and he managed to concede just 15 runs in four overs in a high scoring encounter. The Afghanistan spinner will be crucial to the plans of the Gujarat franchise yet again in the final of the edition and he has the ability to turn around games from a difficult situation. He has picked up 18 wickets so far in the tournament and will be looking to add some more to his tally.

Cautious Pick – Rahul Tewatia has not got an opportunity to bat in the last 2 out of 3 games because the top-order has done the maximum scoring. If the same happens in this game, he is unlikely to deliver a decent performance.