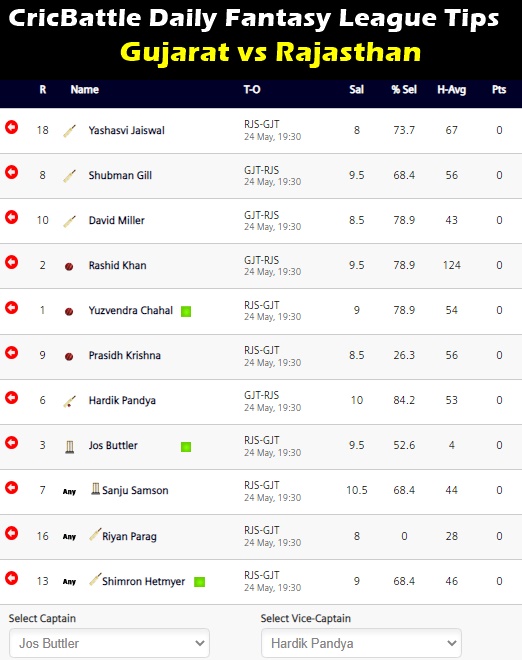 Gujarat vs Rajasthan on May 24

Rajasthan Royals are all set to take on the Gujarat Titans in their next encounter in the Qualifier 1 of the playoffs of IPL 2022. The Sanju Samson-led side is coming off a victory against Chennai Super Kings in their final game of the league stage and the franchise will be looking to continue with the winning momentum into this game as well. They are likely to stick with the same combination. Gujarat Titans, on the other hand, suffered a loss in their final game of the league stage against the Royal Challengers Bangalore. The Hardik Pandya-led side still has a lot of positives going their way despite the loss and they will be looking to be wiser with their lines and lengths instead of changing the personnel. Alzarri Joseph might replace Lockie Ferguson who did go for a few runs in the previous game.

Best economical pick – Yashasvi Jaiswal has been in great form for RR and has scored 2 half-centuries in the last 5 matches. He has scored 212 runs in 7 matches at an average of 30.29 and a strike rate of 135.03.

Top captains & vice captains – Jos Buttler has made 629 runs in 14 matches at an average of 48.38 and a strike rate of 48.38. Buttler is the current orange cap holder in the tournament and has scored 3 centuries and 3 half-centuries. He has not been able to make a double-digit score in the last 3 matches and is likely to make a comeback in this important game. Hardik Pandya was back at his best in the previous game after some quiet outings in the last few fixtures and his unbeaten 62 would have given him plenty of confidence ahead of the playoffs. He was recently named in the Indian squad for the South Africa T20I series and will be the first-choice all-rounder after turning up to bowl for his IPL franchise. He will be the key batter for the Gujarat Titans in the upcoming important fixture.

Smart pick – Rashid Khan is yet to delivery with his full potential in the tournament. However, the Afghanistan spinner was the pick of the bowlers in the previous game with a two-wicket haul and played a quickfire cameo down the order as well. He will be looking to bring his A-game in the playoffs.

Cautious Pick – Mathew Wade has been included in the playing 11 in the last 3 matches and has not been able to score over 20 runs. You can avoid picking him in your fantasy team for this match.