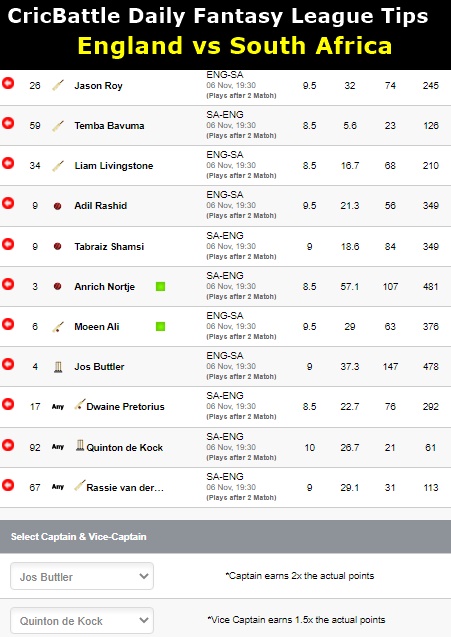 England vs South Africa on November 6

England and South Africa will battle it out against each other in the Match 39 of the World T20 Cup. The former has had an impressive run in the tournament. The Eoin Morgan-led side has won all their matches in the mega event so far. They are comfortably placed at the top of the Group 1 points table. Heading into this match they will aim to take their winning momentum further. South Africa, on the other hand, has also exuded some great character in the marquee competition. In their previous game against Bangladesh, the team dominated the proceedings by securing a thumping victory by six wickets. The contest between the table toppers of the Group 1 will be an intriguing contest to watch out for.

Best economical pick – In four matches, Dwaine Pretorius has managed to pick seven wickets with an average just above 10. He has shown a great level of consistency and the wickets have suited him. He might seem like the weak link in this bowling attack, but his performances have stood out. Any team with a successful fifth bowler is bound to have success and Pretorius and the Proteas have shown that in this tournament.

Top captains & vice captains – Jos Buttler is one of the most pivotal cogs of England’s wheel. In the previous game, he hit a belligerent century to put the team at the driver’s seat. He can be a good player to bank on for this game. Quinton de Kock had started the year with some good scores under his belt. But, in this tournament, his numbers have been underwhelming, to say the least. However, his average signifies that he will come good at one point. A lot has happened in this tournament that has made his numbers drop, one would say. But, this could be his opportunity to fix those numbers and come good when his team requires him the most. On top of that, he assures any fan of at least one or two dismissals.

Smart pick – Moeen Ali comes in handy with his all-round abilities. In the last match, he picked up two wickets. He is a good timer of the ball and will be determined to perform for the side.

Cautious Pick – Dawid Malan has recently been dethroned from his no. 1 T20I men’s batter rankings. Some of that has to be associated with his own batting form, which hasn’t been all that good in this tournament or leading into this.