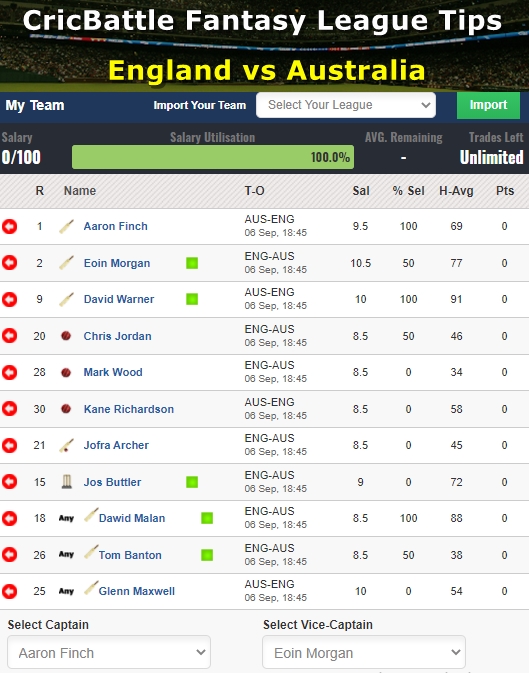 England vs Australia on September 6

After the humdinger of a game in the first T20I, England and Australia get ready to face each other once again at the same venue on Sunday for the 2nd T20I. The Aussies have themselves to blame for the loss in the last match. After their top-order fell, the middle order was completely exposed and they failed to pull off what should have been an easy chase. England would be proud of their performance and will be high on confidence. They’d like to win the second T20I as well and seal the series. However, Australia will definitely not let things slip out of their hands so easily. They are expected to put up a tough fight and level the series.

Best economical pick – Dawid Malan played in 14 T20I innings thus far. He reached the double figures in all the innings and crossed the 50-run mark in 8 innings. He was in great form in the last game as well.

Top captains & vice captains – Aaron Finch seemed to be in splendid nick on his return to international cricket in the 1st T20I, and notched up a quick-fire 46 off just 32 balls, which was an innings studded with 7 fours and 1 six. And in this game, his form could continue. With Warner playing the anchor role to perfection alongside him, Finch could unleash himself in the powerplay on the England bowlers, who didn't have much of an answer to him. Finch will look to lead from the front as his team attempt to pull themselves level with the series on the line. Eoin Morgan's white-ball prowess makes him a strong candidate to be the vice-captain of your fantasy team in any game that he plays, and the fact that he didn't score much in the 1st T20I further adds weight to his case. Morgan scored an early boundary before an ill-advised dance down the track against Glenn Maxwell, but now that he knows that the pitch is a touch on the slower side, he will be far more cautious.

Smart pick – Glenn Maxwell ended his long wait to don the baggy green again in the first T20I, which was his first international game for Australia since October 2019. And although he failed with the bat, smashing an Adil Rashid half-volley straight to Eoin Morgan at cover, he made an impact with the ball by picking up the wickets of the England captain himself and Moeen Ali.

Cautious Pick – Moeen Ali has been failing to score since longtime except his only good knock against Pakistan recently. 34 times in his last 72 innings in International Cricket Moeen Ali has not reached double figures. And it doesn't mean once crossed 9 he scored big, 20-25 times after crossing 9 didn't reach 20.