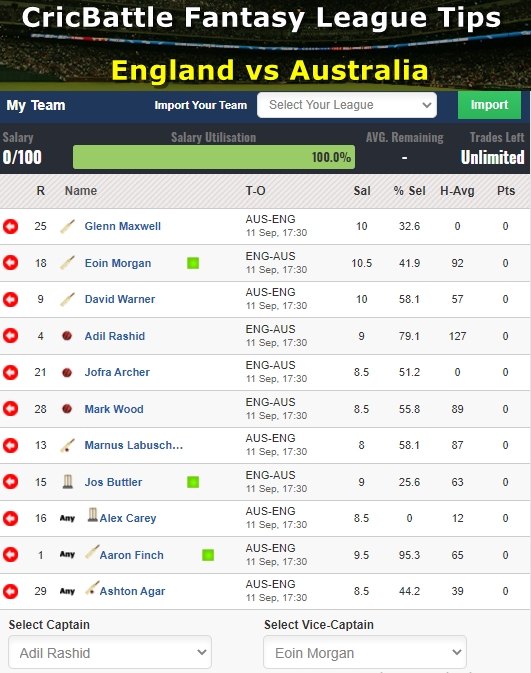 England vs Australia on September 11

England has dominated every opposition this summer and, after beating West Indies, Ireland, and Pakistan, the home team recorded a T20I series win over arch rivals Australia. The two teams will switch formats now as they gear up to battle in a 50-over series at Old Trafford. The first ODI match will be played on Friday evening, and it will be Australia's first ODI game after March 2020. They had beaten New Zealand at the Sydney Cricket Ground six months ago, but before that they had lost an ODI series each to India and South Africa. While the Indian team beat them 2-1, South Africa whitewashed them 3-0. England recorded convincing wins over Ireland in the first two fixtures of their ODI series, but the Irish team upset them by seven wickets in the final One-Dayer at The Ageas Bowl. As both teams have struggled a bit in this format this year, they will be keen to improve their respective records. England will be the favorites to win this match given that they have much more practice heading into this 50-over game. It will require an extraordinary effort from Australia to beat England.

Best economical pick – A fresh breath of air has been Marnus Labuschagne, who has two forty plus scores, two half-centuries, and a sole hundred in only seven ODIs. Hence, the right-handed batsman could be the one shielding the batting from a collapse.

Top captains & vice captains – Adil Rashid was the best spinner amongst the two sides in the three T20Is as he repeatedly threatened the Australian batsmen. He picked up six wickets in three matches, averaging an impressive 12.50 and with best figures of 4-0-21-3. Rashid would be the frontline spinner for England. Eoin Morgan sat out of the final T20 international after injuring his finger in the second game. However, Eoin Morgan should be fit for the three-match ODI series and will lead a full-strength English side. The World Cup-winning captain is also one of the best limited-overs batsmen. The southpaw looked in good touch in the T20s against Australia; however, could not amass a substantial score.

Smart pick – Glenn Maxwell A player who has shown a lot of promise in the T20I series without much end product, Glenn Maxwell could finally unleash himself in the ODI series. With nothing to lose, the explosive batsman could capitalize on the form that the showed in the 2nd T20I, scoring 26 runs off 18 balls with 1 four and 2 six.

Cautious Pick – Moeen Ali has blown hot and cold recently. The all-rounder has scores of 2, 13* and 23 in the T20I series so far. Moeen Ali hasn't been trusted to bowl his quota of overs with the ball as well.