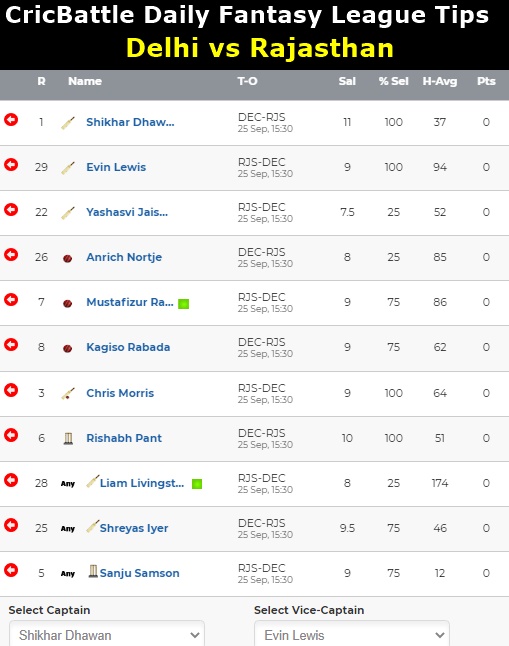 Delhi vs Rajasthan on September 25

In the first match of the doubleheader on Saturday, Delhi Capitals will be up against Rajasthan Royals in the 36th match of the IPL 2021. Delhi Capitals are one of the more formidable sides and are proving their worth under the leadership of new skipper Rishabh Pant. They made light work of bottom-placed Sunrisers Hyderabad, as they sealed an 8-wicket victory on Wednesday with 13 balls still left in the match. They are inching closer to the playoffs. Rajasthan Royals, on the contrary, came out of nowhere to win their previous match against Punjab Kings by 2 runs and registered their fourth win in this year’s IPL. Sanju Samson’s team is currently placed at the fifth spot in the standings with 8 points. In his debut game for RR, Evin Lewis proved that he could change the fortunes for the team from the pink city.

Best economical pick – Yashasvi Jaiswal batted well for his 49 runs in the last game against Punjab Kings. He looked well-settled at the crease and played some phenomenal shots. You can take a risk and pick him as your fantasy team skipper.

Top captains & vice captains – Shikhar Dhawan is scoring runs for fun in this year’s IPL. He is making a clear statement with his bat. Dhawan is currently the leading run-scorer in this competition with 422 runs in 9 matches. Evin Lewis announced himself with a bang for his new team Rajasthan Royals. He was positive from the start and dispatched the odd bad deliveries. He ended his innings after scoring 36 runs from 21 deliveries.

Smart pick – Anrich Nortje was brutal with his raw pace against Sunrisers Hyderabad, picking up the crucial wickets of David Warner and Kedar Jadhav. He deserves the player of the match award for his figure of 2/12 in his 4 overs.

Cautious Pick – Riyan Parag has scored 82 runs and picked up only one wicket in this IPL. Considering his current form, it’s better to avoid him while making your fantasy teams.