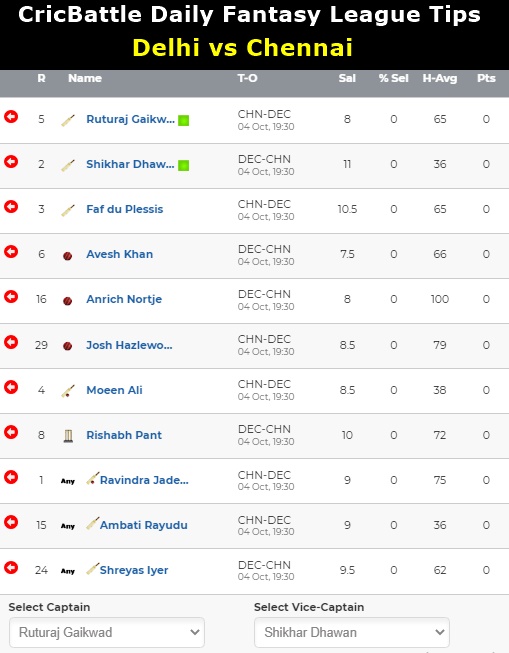 Delhi vs Chennai on October 4

It is a top of the table clash between Delhi and Chennai in the Indian T20 League. Both the sides are qualified for the playoffs with nine wins each and it will only be about strengthening their place in the top two to have multiple shots at the final. Delhi are coming off a brilliant win over Mumbai in their previous game and would want their momentum to continue going into the fag end of the tournament. Chennai also would be keen on gaining the momentum back after the Rajasthan side literally made a mockery of their bowling chasing 190 the other day. They had rested a couple of their bowlers and they might come back in a bid to win this game. The batters, meanwhile, are doing a fine job and they are expected to continue their good run.

Best economical pick – Avesh Khan has been excellent the Capitals with the ball in hand. He has been the standout bowler for the Capitals by a country mile. In 12 matches, the fast bowler has accounted for 21 wickets at an excellent economy rate of seven. In the previous game, he picked up three wickets against a power-packed MI line. Khan will want to replicate something similar even next time around.

Top captains & vice captains – Ruturaj Gaikwad has been outstanding in the 2021 edition of the Indian Premier League. The right-hander has notched 508 runs from 12 matches at an average of 50.80 and a strike rate of 140.33. In the previous game, he scored a 60-ball 100 with nine fours and five sixes. He started his knock by playing at a run-a-ball in the first 29 deliveries before stepping on the gas. 35, 101, and 85. These are last three scores of Shikhar Dhawan against Chennai. Last two matches, he also won the Player of the Match award against them. The southpaw hasn’t been amongst the runs in the last few encounters and this could be the game where he can regain his lost touch.

Smart pick – Moeen Ali is clearly out of touch in the UAE leg. But expect him to make amends sooner rather than later. With four left-handers in the top seven of Delhi’s line-up, he should bowl a few overs too. Moeen is batting at three and can take the game away from the opposition very quickly.

Cautious Pick – Sam Curran was in superb form with the bat and the ball in the first leg of the IPL 2021. However, ever since he went back to England for the summer, his form in both disciplines has dropped. It is not only about T20 cricket, his form in Tests was not good either, because of which was dropped from the England team. In the last two matches, he has bowled eight overs in total, giving away 111 runs with the ball. Now, that is some terrible bowling efforts and he has paid a heavy price for being on point. Curran could struggle for wickets as he has right through the last few months.