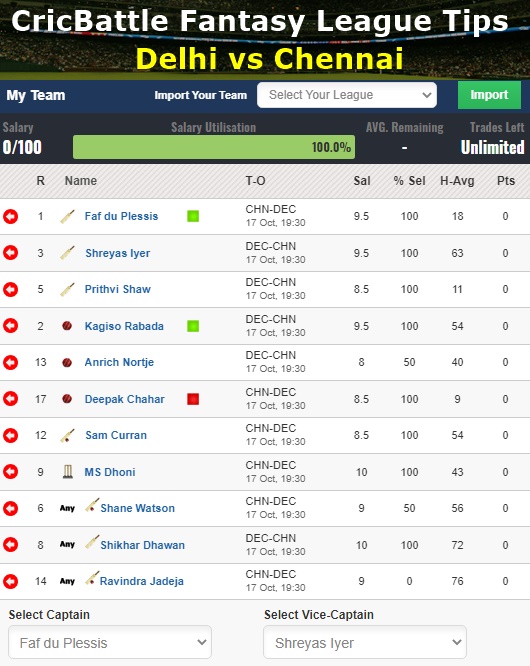 Delhi vs Chennai on October 17

The 34th match of the Indian Premier League 2020 will be played between Delhi Capitals and Chennai Super Kings at the Sharjah Cricket Stadium, Sharjah in the UAE.  The second game on a double-header features a solid Delhi Capitals side, who currently sit at the top of the IPL points table. While their batsmen have done the business for them, it has been their bowling attack and especially the duo of Kagiso Rabada and Anrich Nortje that have led them to the top. Their opponents, the Chennai Super Kings, have gained some momentum of late, courtesy of a new batting approach which includes Sam Curran at the top of the order. With the duo of Ambati Rayudu and Shane Watson also finding form against SRH, CSK will be bullish about their chances in this fixture. Against a power-packed batting unit, CSK's resourceful bowling attack is in for a test. The reverse fixture between the two sides in IPL 2020 saw DC beat CSK by a huge margin of 44 runs in Dubai. However, CSK hold the edge in the overall head-to-head scenario with fourteen wins compared to Delhi's seven.

Best economical pick – Sam Curran scored 99 runs in 7 innings at a strike rate of 190. He should be a great pick if he continues to open the innings. He also picked up 9 wickets with the ball.

Smart pick – Shane Watson is providing CSK with some fine starts. He batted at three in the last game and did a decent job. In 8 games so far, he scored 241 runs.