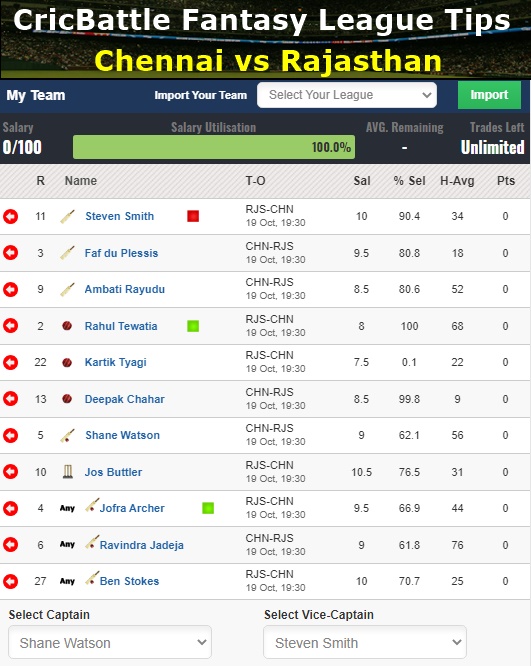 Chennai vs Rajasthan on October 19

Chennai Super Kings and Rajasthan Royals are pretty much in similar situations in the 2020 edition of the Indian Premier League. Both teams have lost six out of their first nine matches and are precariously placed at the bottom half of the points table. The two teams are next scheduled to lock horns with each other on Monday, October 19 at the Sheikh Zayed Stadium in Abu Dhabi. In their previous meeting, the Royals beat the Super Kings by 16 runs after posting 216 on the board. However, outside Sharjah, RR have strained, to say the least. In fact, in their last seven games, they have lost six. Even in their game against the Sunrisers Hyderabad, they got out of jail. Both RR and CSK can’t afford defeats as it will make their journey a difficult one in the event.

Best economical pick – Rahul Tewatia has impressed with his all-round performance. He is the only biggest positive for the team in the last nine matches. The allrounder is hard-hitting batsman while has got the knack of picking wickets and also an excellent fielder. He is a vital cog for Rajasthan Royals this season.

Top captains & vice captains – Shane Watson started the tournament with a few low scores, but he has found his mojo. In nine matches, the right-hander has 277 runs with two fifties at an average of 34.62. Against the Royals, Watson doesn’t have poor records by any stretch of the imagination. In five games, he has 191 runs at an average and strike-rate of 38.20 and 151.59 respectively. He also has a top score of 106. Steve Smith started the IPL with a couple of half-centuries to show for his efforts. But thereafter, he entered into a slump and strained to cross even the single-digit score. The right-hander, however, got his form back with a fifty against the Royal Challengers Bangalore, though it came in a losing cause. Smith also notched 69 when the Royals last met the Super Kings in Sharjah.

Smart pick – Faf Du Plessis top-scored for the Chennai Super Kings with 58 off 47 deliveries, containing six fours and two sixes in the last game against DC. Faf Du Plessis was the aggressor in the partnership with Shane Watson that extended till 87 runs as it brought the three-time champions back in the game.