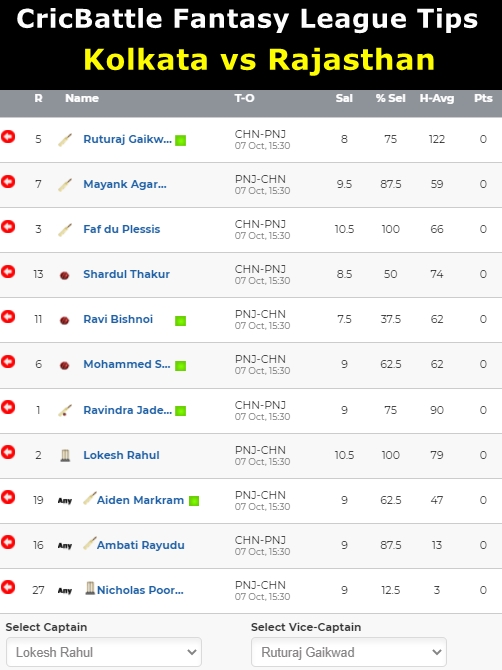 Chennai vs Punjab on October 7

Chennai is comfortably placed at the 2nd spot in the points table. The MS Dhoni-led outfit has won 9 out of their 13 matches in the tournament. In their previous rubber, the ‘Men in Yellow’ were beaten by the Delhi side by 3 wickets. Punjab is occupying the 6th spot in the table and has only managed to win 5 out of their 13 rubbers. They went down to the Bangalore side in their previous match by 6 runs.

Best economical pick – Shardul Thakur makes things happen with the ball. He picked two wickets in a single over against Delhi to turn the game on its head. He is the highest wicket-taker for Chennai this season with 15 wickets to his name in 13 innings. Though his economy of 8.52 is a little on the higher side, Shardul provides breakthroughs and picks wickets consistently.

Top captains & vice captains – KL Rahul is the highest run-scorer in the 2021 edition of the Indian T20 League. The Punjab skipper has plundered 528 runs this year, at a superb average of 52.80. Rahul has scored 5 fifties in the tournament as well. Ruturaj Gaikwad is the second-highest run-scorer in the Indian T20 League this year and has amassed 521 runs at an average of 47.36. He has scored 3 fifties and a century in the 14th edition of the tournament.

Smart pick – It is very unfortunate that whenever Mayank Agarwal scores a half-century, Punjab ends up losing the game. But the opening batsman plays some gorgeous shots and makes sure to give the team a splendid start every time he walks out to the middle. Agarwal has scored 429 runs in 11 innings this season at a strike-rate of around 142, much better than his skipper KL Rahul.

Cautious Pick – Deepak Chahar had started the tournament with some good performances but in the last few matches, he has failed to pick up wickets regularly. With the new ball, he is effective but he doesn’t pick up wickets every day. Instead, there are bowlers like Shardul Thakur and Mohammed Shami, who are better picks in this contest.